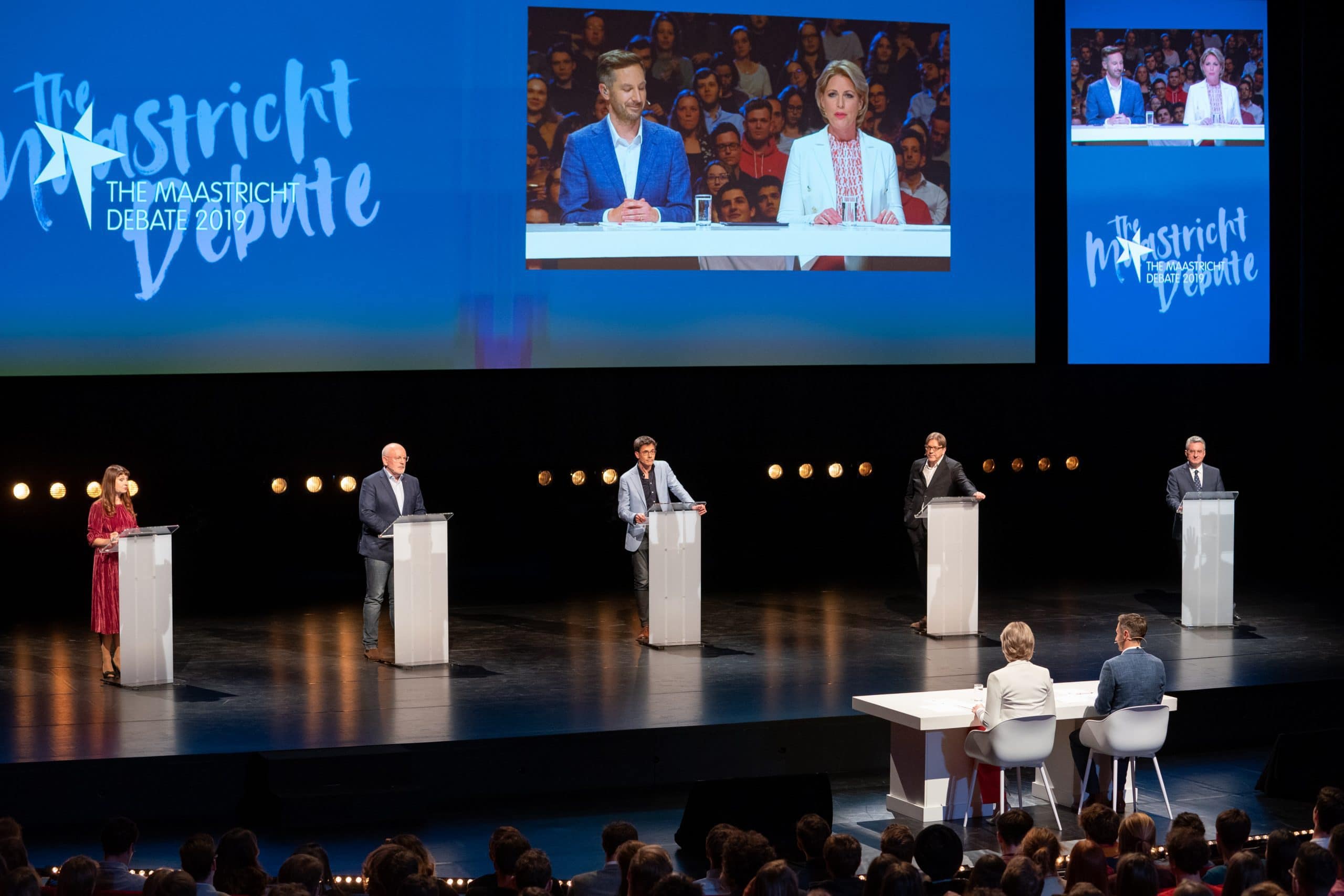 The Maastricht Debate took place on April 29 with the lead candidates of the European political parties for the role of European Commission President. Tickets for the debate inside Vrijthof Theatre were sold out within an hour! With our Live Viewing Party at Vrijthof Square we gave everyone who didn’t have a ticket for the debate inside the theatre the opportunity to watch the debate on a giant screen. In a cosy setting with foodtrucks and a full evening programme with great music performances and a silent disco.

The Maastricht Debate between the ‘Spitzenkandidaten’

The five Spitzenkandidaten, lead candidates of the political parties, taking part in the debate were:

The moderators, Rianne Letschert, rector of Maastricht University, and Ryan Heath, political editor at POLITICO, made sure that the debate kept the audience intrigued with direct and spicy questions, which had to be answered in a maximum of 1.5 minutes by each candidate.

In front of an audience of 500 young people, mainly first-time voters, and in the presence of a wide range of national and international media, the debaters answered questions along three main themes: Digital Europe, Future of Europe, and Sustainable Europe.

Leading up to the debate, Maastricht University carried out a survey with the aim to get a sense of the issues young people view as being particularly pressing. The results of the survey influenced the formulation of some of the questions to the Spitzenkandidaten during the debate.

And the winner is…

During the debate, the audience could vote for the best debater. The winner was Frans Timmermans, with Bas Eickhout as runner-up.

For an extensive summary of The Maastricht Debate you can read the following article by the The New Federalist here. And watch the full debate here.

As if it were a football game, the full Vrijthof festival area was filled up with people watching the debate on a giant screen. Watching and listening carefully, applauding and reacting on the debate taking place inside the theatre behind them. And, The Maastricht Debate bingo was a big success!

But, what’s a party without foodtrucks and a silent disco, right? So, we organised a full party-programme with foodtrucks, drinks, cosy seating, live music, and silent disco. At our What’s Up Europe? infomarket visitors could meet organisations who also work on Europe to strike up a conversation or to make their own protest sign at the ‘I Am so Angry’photobooth.

If you were President of the European Commission…

At our own Maastricht, Working on Europe stand, people could participate in a competition imagine themselves in the driving seat of Europe and give free rein to their ideas. Our question “If you were President of the European Commission, what would you change/do for Europe?”generated a whole raft of interesting, funny, strange, radical and downright serious suggestions. In the end however, it was Diana Launert’s detailed proposal for a European Youth Climate Corps that stood out, as it addressed a returning theme in the run-up to The Maastricht Debate and gave it a unique twist. Diana won dinner for two at popular Café Sjiek in Maastricht city centre.

Over 50 universities and other organisations around Europe organised debate-watching events. The Maastricht University Campus in Brussels organised another Live Viewing Party at the Esplanade of the European Parliament in Brussels.

Straight after the debate there were 133.500 live viewers of the stream. The current number of views is over 240.000.

RTV Maastricht made a video report of The Maastricht Debate (in Dutch), you can watch it here.

The Maastricht Debate 2019 was organised by the three partners of Maastricht, Working on Europe: Maastricht University, the City of Maastricht and the Province of Limburg – as well as the European Youth Forum and the European Journalism Centre. We worked together with POLITICO to reach a broad audience.