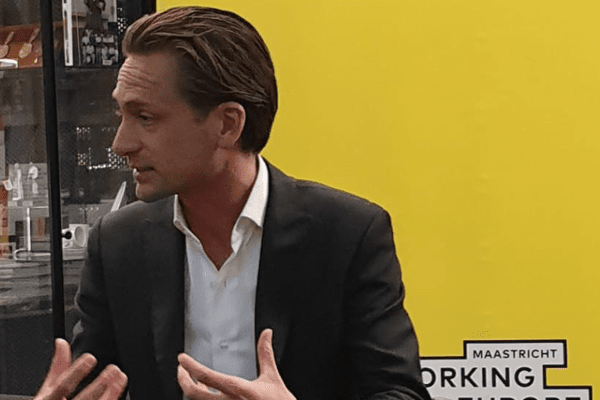 For those who want to know all about voting, the European elections and what the EU is doing for you, we organized this interactive question and answer session especially for the residents of Maastricht and their neighbours. Starting with the question: What connects Pamela Anderson and John Le Carré?

Answer? A beating heart for Europe. That is, according to Mathieu Segers’ reasoning during yesterday’s informal question and answer session in the intimate setting of the Dominicans bookstore. Mind you – that beating heart does not automatically mean a ‘ pro-EU ‘ heart. On the contrary, through the critical questions of a mixed audience with a variety of (anti) political beliefs, we viewed Europe from the perspective of its citizens. That means us. All of us. Shortcomings of the current European Union policies were quickly exposed.

In an engaging conversation, we looked at what’s going on in Europe, which recurring themes from recent history still influence us today, and what we can possibly expect after tomorrow’s European elections. Brexit, the central banks, the role of national politicians and the media in the rendition of the infamous ‘ ever closer alliance between the peoples of Europe ‘ were all covered. Also how we handle information, and how we react to it. From East to West and South to Northern Europe.

Due to the limited number of participants the event turned into an in-depth discussion in which it soon became clear that we – as Europeans – can actually talk about Europe. Especially if we dare to move away from simplifications like ‘ left or right ‘, ‘ for or against ‘, ‘ black or white ‘ and thus off the division that our continent is struggling with. The only thing that was missing was Pamela Anderson himself.