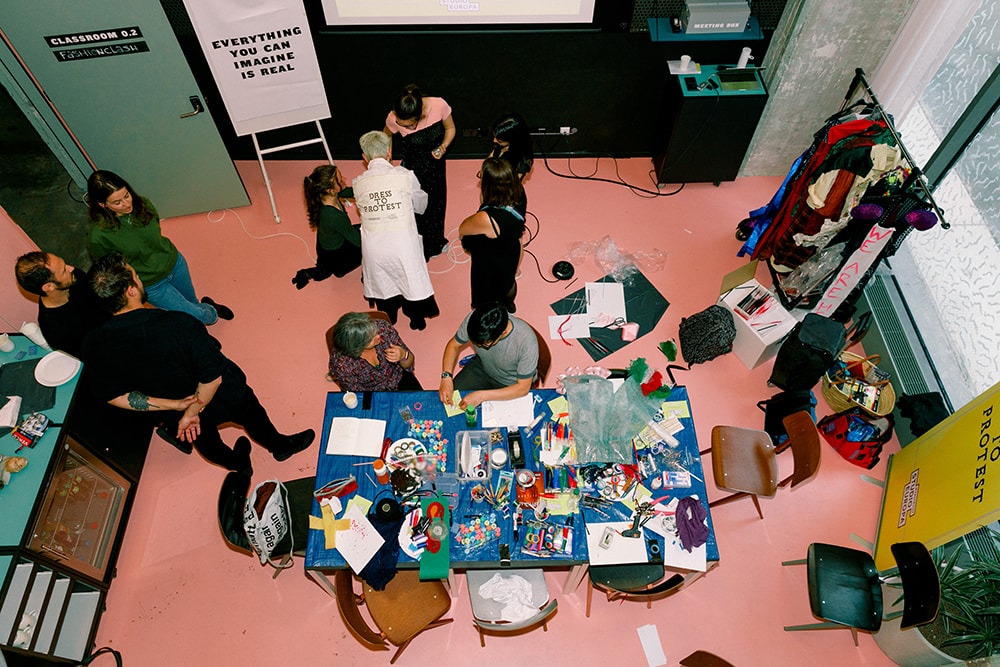 What do young people think about Europe and today’s challenges in Europe? That’s what our ‘Dress to Protest’ workshops for young Europeans are about. In May the very first edition took place in collaboration with Fashion Clash and volunteers who worked in fashion before and students from Maastricht Academy of Fine Arts and Design (MAFAD). We’re excited to announce that the workshop will have several follow-ups in September! With the imaginative power of fashion, a group of high school students shared their visions, personal stories and messages for Europe. Continue reading and learn more about the designs made during the latest workshop.

Three guys with something to say designed a t-shirt showing a figure who can’t say a thing. The pressure of social media and its popularity ratings on young people’s lives, represented by the slogans, is contrasted starkly against the bright yellow figure, which shows “someone being censured,” according to Jack. “People are putting hashtags like #SlayQueen, #100 and #bruh all over Instagram,” he says, “and whenever people use them, they get loads of ‘likes’, and tons of people who ‘like’ the post, without even paying attention to the content” he continued. “That’s why we put them here, with our guy who’s got X’s for eyes to symbolize this exaggeration.”

Editor’s note: while a new generation of popular movements such as young climate protesters or the yellow vests, which are often founded or gain momentum online, are all about speaking up, the group’s t-shirt is a reminder that censure is not just something imposed on us by others. We also censure ourselves to fit in, to score the most ‘likes’. Add a hashtag that’s already viral, and what you choose to say – or not – is swept up in the storm.

Nora designed a green tulle/net hat with ‘fuck’ glued onto it in large letters, and a pair of blue shorts featuring the slogan ‘save our planet’ with a globe. Leah wears a ripped, white shirt with swearwords written all over it.

At first glance, Leah’s creation, a ripped shirt featuring a generous catalogue of swearwords, looks designed to offend. But it is precisely the ability of these words to inflict pain that she wants to highlight. “When people call you names, this shirt symbolizes that you shouldn’t let those words get to you,” she explains. “By writing them on here, [it enables] you [to] take the shirt off and remove the insults – just drop them into the laundry!”.

Nora’s hat-and-shorts combo for men doesn’t pull any punches. Designed for men to wear without a shirt, the bold statement protests against the pollution of our planet and the need to come up with large-scale solutions. “It spells out ‘FUCK’ as in: we’re fucked, so get off your ass and save the planet!” she says, adding “there’s no planet B!”.

Climate as the most important issue on the European agenda

Anna decorated jeans with applique butterfly, sheer plastic patches and “No plan B” written across the back. Julia created a “Save the Ocean” t-shirt with blue plastic netting.

Anna firmly wanted her jean’s slogan ‘No planet B’ to be placed “on the butt, because that’s where people look!”. Both she and her friend Julia used the workshop to highlight their concern for the environment, acknowledging that “we can’t undo our actions when it comes to our past consumption of plastic, but we can help by doing something now to avoid (dumping) more of it onto the planet.”

Julia worked this into a t-shirt featuring the slogan ‘Save the Ocean’ on the front and richly decorated with plastic netting on the back. Large slits in the side of the t-shirt are held together by more discreet plastic ties, illustrating the ‘hidden’ types of pollution not visible to the naked eye or commonly seen in the European landscape.

Niels (conceptual designer) and his crew from Maastricht Academy of Fine Arts and Design (MAFAD): Dana, Sophie, Max and Jolieke

Niels’ creation is a parachute for which he deliberately chose the colours of Maredsous, known for its beer and cheese, representing two things much loved by Europeans. “Food and drink bring people together, regardless of their background. And who doesn’t love beer and cheese?” he laughs. Niels voted in the recent European elections, but some of his friends didn’t, and couldn’t see the point of doing so either. His parachute symbolises the European Parliament, which only truly represents the people and will be able to rise if everyone casts their vote.

The subtle art of listening

Sean made a black outfit with white bands and ‘Holier than thou’ written on the back in white lettering. This creation symbolizes a big problem in European and global politics nowadays: the fact that ‘left’ and ‘right’ don’t listen and talk to each. Parties with different views resist to have proper conversations (the costume literally blocks one to speak), turn their backs on each other  and seem to feel better than the other: “they avoid the conversation and feel better than other people (I’m ‘Holier than thou’).”

Junk can be beautiful. That was the message Vivian wanted to project with her ballgown creation aimed at highlighting the need for more recycling and upcycling of used materials. Her black glittery ballgown in a mermaid style is held together by rows of safety pins, representing ‘upcycling’ on its train. “I wanted to make something fancy out of junk. This may just be wire and ready-cut materials, but I wanted to show that it’s possible to re-use almost anything to make something else,” she says. Her design includes a new logo symbolizing ‘upcycling’, in the shape of safety-pin arrows that dip down from their starting position before turning upwards. Next stop: the MET Gala!