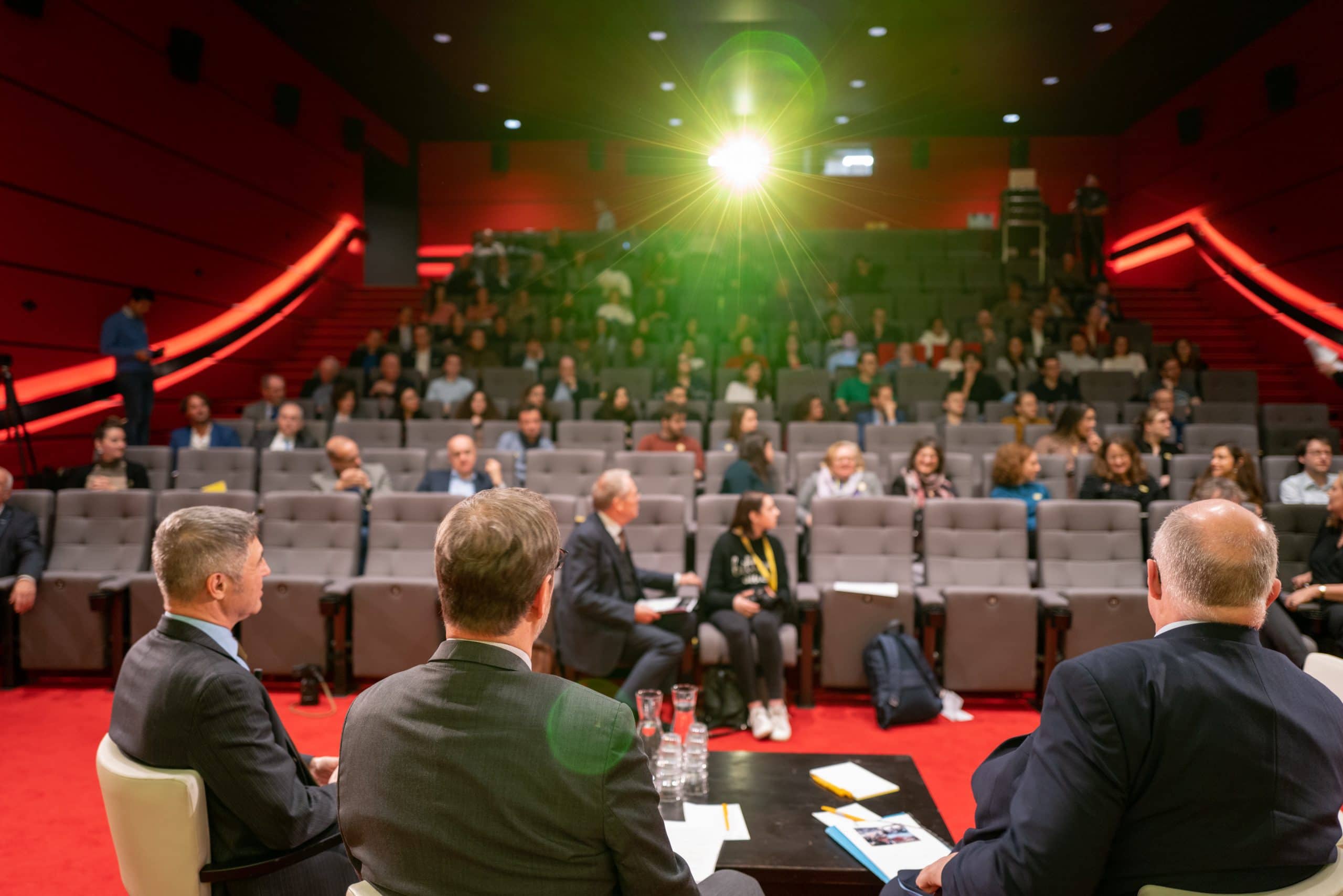 During the Maastricht Europe Days a broad range of events, workshops and activities served as a meeting place for public dialogue. Within this setting the Maastricht Debate on EU Agencies took place at Lumière on 6 December 2019. The debate was co-organized by Studio Europa Maastricht, the Faculty of Law of Maastricht University and its Maastricht Centre for European law in close collaboration with the TARN research project on EU Agencies led by Professor Ellen Vos. With 2 panels and 5 invited speakers (Alex Brenninkmeijer, Member of the European Court of Auditors, Monique Goyens, director General of BEUC, Bernd Körner, Deputy Executive Director of Frontex, Jukka Malm, deputy executive director of ECHA, Alberto Spagnolli, Senior Policy Coordinator at the Executive Director Office of EFSA) Tracey Brown, director of Sense about science, moderated a two-hour lively discussion on how EU Agencies improve the lives of EU citizens and how citizens may or should be engaged in their activities.

Do EU Agencies improve our lives?

Through the lens of the invited speakers, it has become evident that EU Agencies improve our lives in many different ways. FRONTEX is tasked with border control and surveillance which has become extremely challenging nowadays with the migration crisis. EFSA serves as a scientific forum for all EU legislation relating to food safety whereas ECHA ensures that the public is safe from hazardous chemical substances which may lead to serious health issues or environmental harm. It became also clear during the debate though that not many people know about the existence of EU agencies and what they precisely do.

Can EU Agencies do a better job?

The debate made clear that EU Agencies are part of the EU’s institutional structure and their work fosters the institutional value of the EU itself. Panellists emphasised that Member States and their national agencies are closely involved in the EU Agencies’ work. National representatives sit for example in the agencies’ Management Board whereas in relation to EU Agencies, such as FRONTEX, joint operations for border control and surveillance are undertaken together with Member States. Agencies report on their activities annually.

Particularly for food safety, health and environmental protection the role of EFSA and ECHA is crucial in furnishing the scientific underpinning of decision-making. Nonetheless, in cases of scientific uncertainty, science cannot provide the final solution since risk regulation depends also on risk acceptability and the level of precaution that EU institutions are willing to take. The panellist explained that the role of EU Agencies is difficult as they deliver scientific opinions but they do not take the final decisions, that may at times be political.

EU Agencies become stronger with communication, but could do better, the panellist and audience agreed. The key is for EU Agencies to start ‘internalizing’ their audience so that the message they want to convey becomes more impactful. The moment that Agencies start to look at their work from the outside, from the ‘receiver’ perspective, EU Agencies will surely need to transform their institutional behaviour and communication from the outset.

The majority of EU Agencies has been established in times of crisis, such as the mad cow crisis or the current migration crisis. However, politicians tend to overlook that Agencies possess a permanent role and, thus, need sufficient budgetary resources to perform their tasks effectively over time.

Should, and how can, citizens become more engaged?

EU Agencies are not operating in isolation from Member States and citizens. While stakeholders participate in the decision-making process of EU Agencies, including consumer organizations and civil society more broadly, the main challenge is engagement with citizens, particularly young people, who are not involved in formal public consultations. Through dialogue with civil society, EU Agencies should accommodate consumer preferences and not solely industrial interests. Transparency is hereby key.

The importance of education was raised by the audience. Knowledge on EU Agencies should be integrated into the national education systems to help people understand their role and complex structure and, extensively, realise their significant contribution to our lives.

EU Agencies’ added value is specialisation and expert knowledge, although this means inevitably that they are mostly known to the industry rather than to the average citizen. Additionally, EU Agencies form an integral part of the decision-making process taking place at EU level and operate in the shadows of the EU’s political institutions. For this reason, audience and panellists agreed that better communication through media is vital and a “face” and a “good story” to communicate with the public are key elements. Communication about agencies would be hence effective when selecting a few showcases, telling the narratives about one particular agency and giving the agency a face.  The case of the pesticide glyphosate, which has been in the public spotlight recently, demonstrates that media exposure has value from its own say.

The debate was closed by Professor Jan Smits, Dean of the Faculty of Law of Maastricht University.