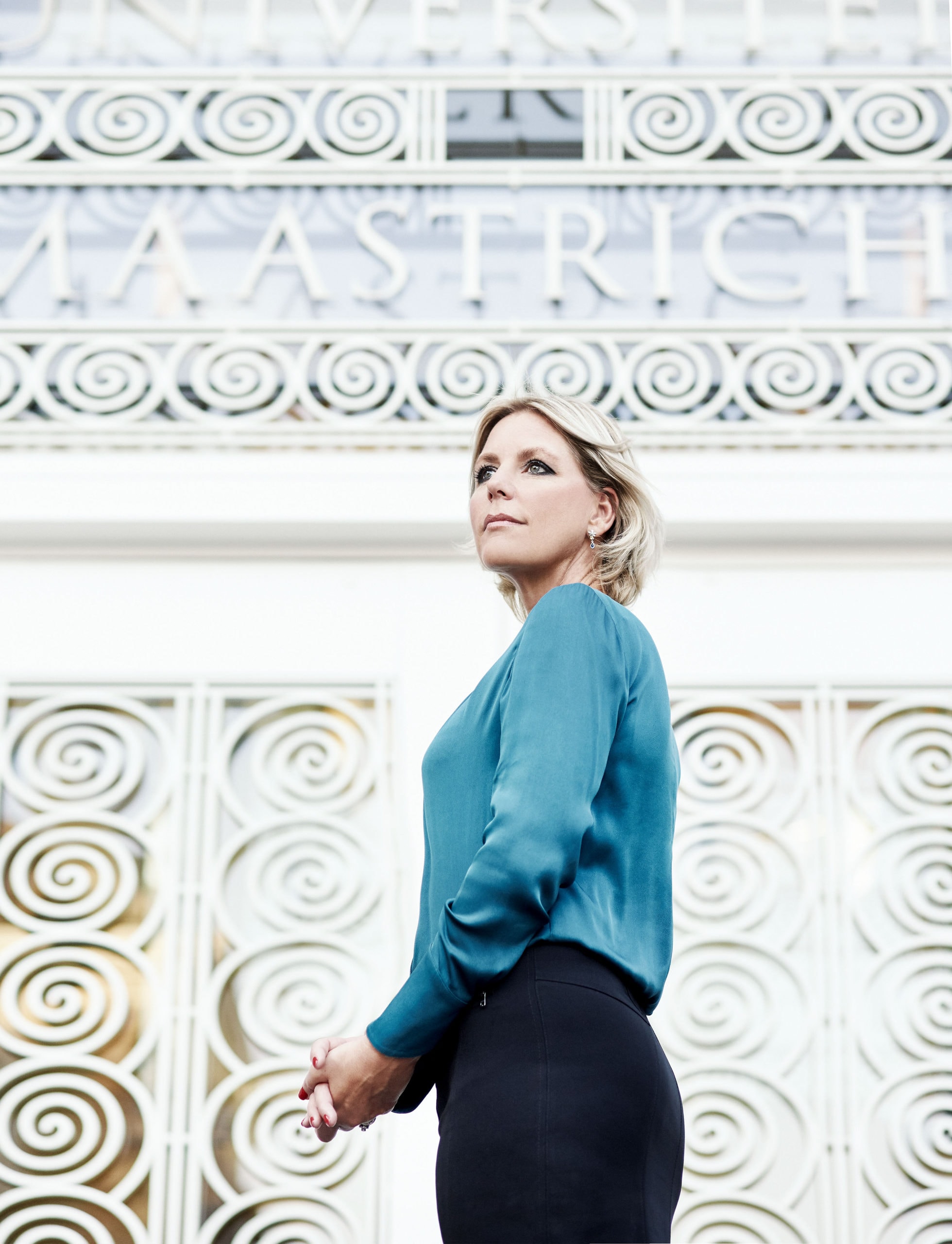 “Sorry to keep you waiting, I was in a meeting.” A few minutes later than planned, Rianne Letschert, Rector of Maastricht University (UM) since 2016, calls. Her typical (online) work day starts early in the morning and last until nine o’clock. “After a working day, I want to throw all these devices into the bin but that’s not a good idea.” After all, these times demand what Letschert is known for: leadership.

So-called Zoom fatigue is not the only experience she shares with students. “I hear from students that they are getting used to the online environment, but everything that makes studying a complete experience has disappeared. A chat between tutorials, at the coffee machine, with teachers. I notice that myself, too. Everything is very efficient. You can’t have a spontaneous chat with a colleague or walk into their office.” During our conversation, Letschert talks of her admiration for the flexibility of staff and students. “But there’s a limit. Colleagues speak of a tipping point around the seven week-mark: people are done with Zooming, Teams-meetings, you name it. It’s not ideal, and it won’t be if classes remain online.”

That’s why she’s trying to lobby for more freedom in the next academic year. “Unless there’s a second wave, there’s no way we remain mainly online. Cities have been largely reopened, so it’s unthinkable that we cannot give lectures.” Letschert is happy with impending relaxations (students will be allowed to use public transport during rush hour from September onwards) and remains optimistic that changes regarding social distancing will follow. “I hope that if we take enough measures, we can make a strong case for the importance of on-site education for the development of this generation. It’s not just about earning credit.”

Letschert’s view on the importance of on-site education is broadly shared among Dutch deans. They recently wrote an op-ed which calls for a restart of on-campus education as soon as possible. Maastricht University’s teaching model – tutorials in small groups where students take the initiative – has become an example for other universities. “The Maastricht model is sometimes mentioned by other rectors in the context of corona. After all, large lectures can stay online, but on campus education should take the form of smaller working groups. I don’t hear any rector say that we should go back to large lecture halls. “

The main question on the minds of staff and students is how and where to organise lessons.The approach of the Dutch government, in which plans were updated every three weeks, is problematic for future planning. Letschert: “Students want to know now what’s happening from September onwards. Our sector works with cycles starting in September, we’re now planning classes until Christmas. We can’t leave our planning until mid-August. By then, we’ll have already made our decisions – but without taking all interests into account.” That’s a situation Letschert would like to prevent. “If we as university rectors decide to go online until Christmas, students simply wouldn’t come back to Maastricht. That’d damage the entire chain around the university: the rental market, catering, shops. It’d be wrong if the universities decided unilaterally. You have to discuss this at regional and city levels.”

Balancing act
The picture is clear: many difficult decisions have to be made in a short time, and leadership is required. Letschert received the Woman of the Year Foundation’s top prize in 2019, partly due to what the jury described as “authentic leadership”, which she considers listening to be the key to. But how to listen to all voices now? Students from UM alone have started three petitions in recent months – on closing the university, no detriment policy, and online proctoring. “I speak to all faculties and many students”, Letschert says. “Faculties all have different cultures and no student is the same. The university is a micro-society. As a board, we have to try and get everyone in the same direction.”

“In a crisis, you’re forced to constantly weigh up different interests”

The large range of interests involved has made some criticism inevitable. “At the moment I’m getting some pushback from teachers. Some say that we’re mainly concerned with the interests of students and not the workload of teaching staff.” Letschert is sympathetic. “Teachers were already heavily burdened, and now even more. Online education is a separate profession. Moreover, not everyone has their own office; people are using their children’s rooms to teach. In a crisis, you’re always weighing interests, there’s no other way.” When asked whether balancing a range of interests is frustrating, Letschert is clear. “Not frustrating, but complex and educational. It’s a balancing act, which sometimes results in the benefit of students and other times in the benefit of teachers. I should try to do that with complete transparency and some common sense. And I’ve also made mistakes. We’re not robots.”

Alongside coronavirus, Letschert is thinking about longer-term issues. “The ambition of this country was always more higher education. I disagree with that; we need practically trained people just as much. But the funding is lagging behind the ambition. The number of students is growing, but the resources per student are decreasing. At a European level, we lag behind Scandinavia and Germany –  the difference is even more pronounced when we compare ourselves to China. Research funding is used to finance education and at a certain point, that’ll go  wrong. In that situation, it takes decades to rebuild your frontrunner position.” Letschert describes the task universities should assume if they want to prevent this: “We should better argue that universities are not like a secondary school. We’re the engine of the knowledge economy. Every investment in higher education pays off.”

As far as Letschert is concerned, the recent political discussions in the Netherlands about the internationalisation of academic education are somewhat shortsighted. “In the long term, we must attract foreign students given the Netherlands’ aging population. If we lock the door now and implement nationalist measures, we’d be throwing the baby out with the bathwater.” One of the major concerns of UM is that international students will not come at all because of coronavirus. “I hope so, I haven’t seen any decline in registrations yet”, Letschert says. “New students may be hesitant to move to Maastricht, so we are communicating the measures we’re taking to guarantee a good level of safety. For example, we’re adding people with physical health expertise to our mental health staff. Those people can direct students to the right professionals. That’s sometimes a quest, especially for our foreign students.”

There are concerns that coronavirus has set university back in some ways – given that it can no longer open its doors to students. But it is also prompting new innovations. “Researchers are suddenly putting aside competitive attitudes and taking on a sense of joint responsibility. Although competition is not necessarily bad, it’s excessive in academics. Researchers sit on data for a long time, which is bizarre. All of a sudden, that’s changing very rapidly.” The development is in line with the plans of the European Commission, which reserved € 25.8 billion  for open science in its next multi-year plan. “This is definitely the time to take open science a step further”, Letschert says. “We must hold onto this.”

Disaster year 2019/2020
UM’s 2019/20 academic year has been defined by crises. First there was the hack, with the university closing its doors and systems until it paid the hackers a ransom. Then came the pandemic. Letschert: “Both the corona crisis and the cyberattack have questioned the open identity of the university. You want to receive students, colleagues and alumni everywhere with open arms: in the library and on the servers. That’s part of being a public institution. The hack taught us the hard way that this approach has limits. We paid those hackers, otherwise we wouldn’t have been able to re-open so quickly. It’s clear that we need to protect ourselves better, especially if we remain partially online for a long time. But we can’t avoid talking to financiers as well. Digital safety has a huge price tag. It shouldn’t come at the expense of education and research. ”

“We’re able to switch faster than we ever thought”

The corona crisis and the cyber hack prompts a fundamental question, according to Letschert. “Do we want to maintain the university as an open and public good? I’d love to do that myself, but I’m paid with taxpayer’s money. Ultimately it’s a political choice: does society think it’s worth it?” However, the academic Letschert hastens to add: “I do hope that this political choice is evidence-based.”

And whether the positive changes that the crises brought – flexibility, innovation, data sharing – will stay? “I expect so, because university directors will say: ‘It was possible during coronavirus!’ Universities are quite conservative organisations, we think we have to think everything through. People say ‘That’s a culture change, it’ll take 10 years,’ I’ve heard it all. But it is possible, we are able to switch faster than we ever thought. Me too. I was hesitant about digital tools and wouldn’t have learned how to effectively use them so quickly had it not been out of necessity.” It shows; while answering the last question, Letschert receives a Zoom call by the university council, the representative student body. “I’m on my way, give me one more minute!”.

After a five-year spell as professor of victimology and international law, Rianne Letschert became rector of Maastricht University in 2016. Since July 2020, she’s been the chair of a taskforce that maps the consequences of coronavirus for the Limburg province.

This is the fourth part of our interview series about European current affairs. In the foreseeable future, conversations will revolve around the European responses to the corona crisis. In part one, Mathieu Segers argues that the coronavirus has put the credibility of European cooperation at stake. In part two, Peter Schröder-Bäck discusses the difficulties of formulating Covid-19 policies in situations of uncertainty. Part three discusses the future of the Eurozone with Clemens Kool.