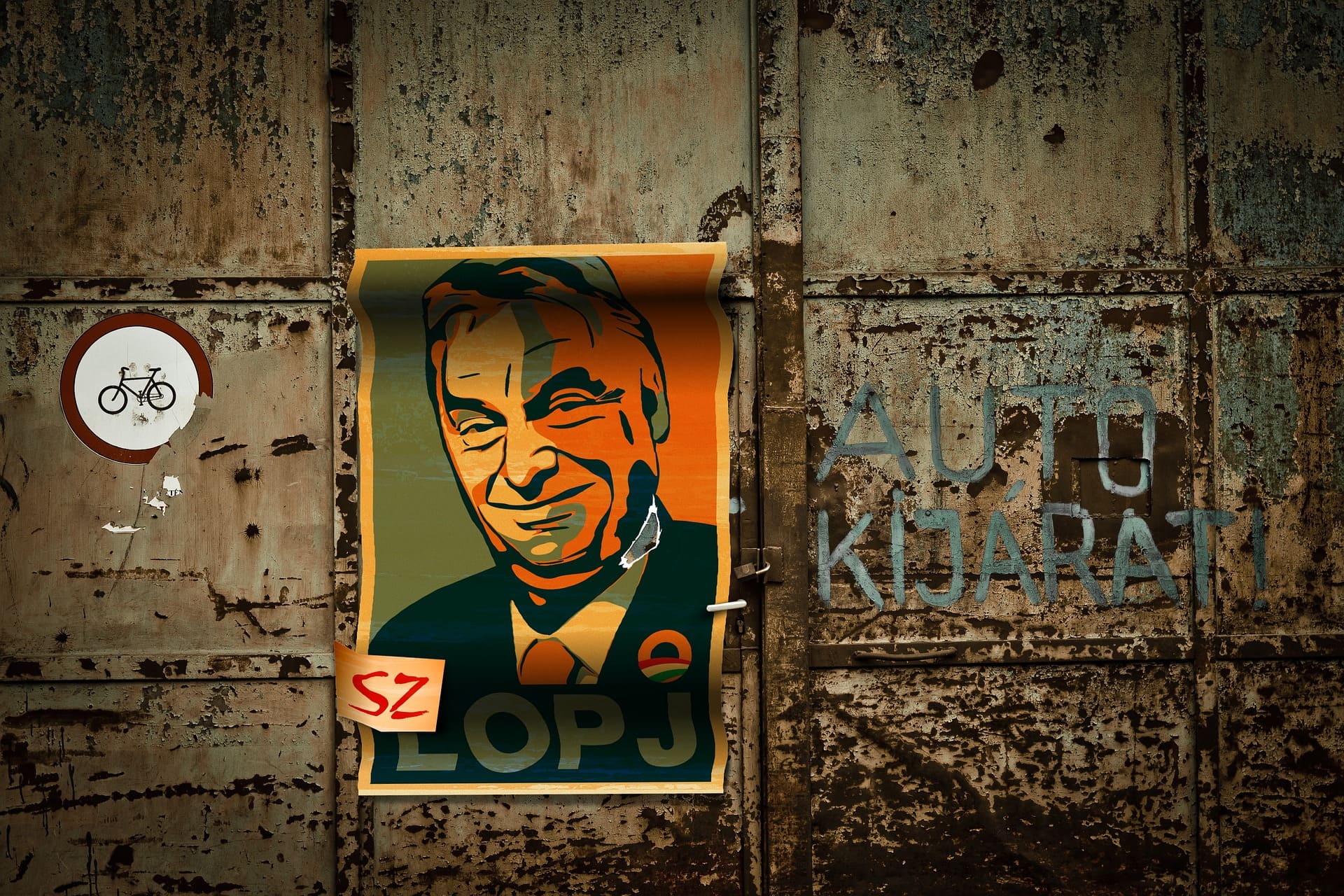 Expert interview: Ferenc Laczó on the rise of ‘soft authoritarianism’ in Orbán’s Hungary

Closing down media outlets, universities and borders: it has been 10 years since Hungarian Prime Minister Viktor Orbán began his challenge to the liberal norms of the European Union. Last year, the think tank Freedom House even downgraded its assessment of Hungary from ‘free’ to ‘partly free’ due to “sustained attacks on the country’s democratic institutions.” Studio Europa Maastricht asks assistant professor in history (Maastricht University) Ferenc Laczó how this has happened and what the EU can, and cannot, do about it. “Western Europeans thought: they’ll become like us and like it.”

Viktor Orbán himself has repeatedly described Hungary under his rule as an ‘illiberal democracy’. We ask Laczó – whose academic research reveals a special interest in East-West European relations – what that means and whether it has a place within the EU’s self-proclaimed liberalism. “The model of illiberal democracy is to monopolize access to resources and gradually create hegemony in all realms of social life”, Laczó explains. “Its goal is to remove any serious possibility to contest what it does, with a weakening of democratic checks and balances along the way. The result of that is that you have a political field – like Hungary’s right now – where elections may be free but cannot be fair.”

The term, coined in the nineties by political scientist Fareed Zakaria, was first used by Orbán in 2014. “Numerous critics have pointed out that there is no such thing as illiberal democracy”, says Laczó, “That it’s a contradiction in terms, and I think that’s right.” Orbán, on the contrary, recently reinforced his belief in the model in an opinion piece in conservative newspaper Magyar Nemzet: “The doctrine that ‘democracy can only be liberal’ that golden calf, that monumental fetish – has been toppled”, Orbán writes. Laczó: “These are not statements of fact, these are statements of political intention on his part; ‘I intend to do away with liberal values’.”

That intention is becoming reality. Observers found that Hungary’s 2018 elections showed an overlap between state and ruling party resources, weakening contestants’ ability to compete with the ruling Fidesz party. What, then, one wonders, separates an illiberal state from an authoritarian one? “We have to realise there is a continuum”, says Laczó, who would classify the Hungarian regime as a soft version of authoritarianism, with an inclination to harden. “We see no physical violence or open oppression unlike, for instance, in Belarus. Electoral manipulation is taking place, but there’s no falsifying of the results. Hungary is somewhere in the middle of that continuum.”

One of the most dramatic areas of change, according to Laczó, is press freedom. “The recent fall of Index, the most widely read news outlets and one of the last remaining major outlets critical of Fidesz, is a major loss.”  What led Hungary – EU member since 2004 – down this path?

“This was not just crisis management, but the far right in power”

As for other major changes in the EU’s political landscape, the global economic crisis of 2008 is central. “Hungary’s fate has to some extent been forgotten because it’s not in the Eurozone and people have been focused on countries like Greece”, says Laczó. Yet, the crisis had a major impact on the political landscape. The Hungarian Socialist Party (MSZP) lost half of its supporters in the European Parliament elections of 2009, and won only 17% of the seats in the 2010 domestic elections. “The left-liberal coalition collapsed because of the crisis. Orbán didn’t win big in 2010 because he acquired additional voters – he’s always been a divisive figure, getting around half of the votes. He acquired a constitutional majority because the incumbent side had collapsed.”

At the time of his 2010 victory, many in Europe considered Orbán first and foremost an anti-communist reformer. His victorious election campaign was based on the promise of significant reforms. “The first Fidesz government rather successfully managed the fallout from the financial crisis. They took a number of measures that were popular and sensible, such as opposing predatory loans.” But these reforms came hand in hand with a new political narrative. The core: liberal democracy has failed. And that perceived failure of liberal democracy has its roots in Hungary’s recent history.

“We tend to celebrate the end of the Cold War as a moment of liberalisation and democratisation. But it  also meant a grave structural crisis in Eastern Europe”, says Laczó. Hungary was heavily indebted, with a sudden wave of unemployment and growing inequality. “The far right was extremely strong in Hungary when Orbán returned to power in 2010. The post-fascist deradicalization that happened in Germany and Italy didn’t occur in Hungary, which had fought alongside the Axis powers. It took many people until around 2015 to realise that Orbán was running the country from a far right, inherently antidemocratic position. That this was not just crisis management, but the far right in power.”

“The EU needs to insist: you can only be in the club if you accept the rules.”

But Hungary’s democratic backsliding cannot be explained by historical and economic factors only. “It’s certainly a consequence of Orbán’s political decisions”, says Laczó. “He could have remained in power without radicalizing his regime, because opposition parties were much weaker and divided among themselves. The radicalisation of Fidesz has a lot to do with how Orbán understands politics; he thrives on confrontation.”

Many in European politics would know. A vote on whether to expel Fidesz – not for the first time – from the European People’s Party (EPP) coalition is expected in the coming months. Too little, too late, Laczó seems to think. “The EPP have played quite a dubious role in the development of the  Orbán regime. There’s little doubt that they enabled Orbán and the authoritarian transformation of Hungary by arguing that the EPP has a few rotten apples, but so do the liberals and the social democrats in the European Parliament.” That’s a problematic approach, Laczó believes. “The issue is not whether Fidesz is a questionable party, it’s about a party using and abusing its power to build a new regime. That’s the problem.”

But Laczó sees a silver lining of sorts to Orbán’s current bluntness about his intentions. “It’s revealing that Hungary says that it doesn’t want rule of law. Hungary goes to Brussels and says: we don’t believe in this. That’s positive, in the sense that it’s a rather open admission that they don’t fulfill the EU’s criteria.” It’s also a chance for the EU to reinforce its position, Laczó thinks. “Now the EU needs to insist: if you want to be part of this club, do you accept such basic criteria?” The clearest attempt to do so to date is the Article 7 procedure started by the European Parliament in 2020, a legal mechanism to suspend a member state when it breaches the EU’s founding values. So far, the procedure has not led to any significant changes to Orbán’s policies.

Was the EU naive to allow Hungary to join? “On the one hand, we should remember that Hungary joined under much stricter conditions than any previous member states, like founding member Italy or Spain somewhat later”, Laczó recalls. “You could argue that the EU was indeed naive, thinking that problems as these would never occur again. In the 1990s, there was an optimism that the EU could widen and deepen simultaneously. Western Europeans didn’t realise this would change a lot about the EU and their political culture. They thought: they’ll become like us and like it. I’m quite critical of Western Europe in that respect; they showed too little interest and displayed a lot of ignorance.”

COVID-19 as a threat to the Orbán regime
With the ongoing COVID crisis raising questions about the limits of law and order internationally, Hungary has drawn special interest, closing borders, declaring a state of emergency, and intimidating citizens calling for peaceful protest. “Internationally, the observation in the spring was that Hungarian democracy has come to an end”, Laczó recalls. “In Hungary, however, most people thought that it was more of the same, that Orbán has been doing this for quite a while, that this was just another small step.”

Whereas many international observers consider the corona crisis another opportunity for Orbán to further strengthen his position, Laczó disagrees. He rather believes the crisis might be a grave danger for Fidesz. “The main legitimator of Fidesz’s power is economic performance, a growing economy. If you ask Hungarians what Fidesz’s main shortcoming is, they’ll say healthcare, the exact thing that’s most relevant now with the pandemic. Support can always tip around if there’s a robust opposition. I really think the next few years will be decisive for the future of the Orbán regime.”

Ferenc Laczó is assistant professor in History at Maastricht University. His research interests include contemporary Eastern and Central Europe, historical memory, and Jewish history. On the latter, he wrote Hungarian Jews in the Age of Genocide. An Intellectual History, 1929-1948 (2016).

This is the sixth part of our interview series about European current affairs. In the series expert interviews we speak with Maastricht University scientists from different disciplines about current events in Europe.