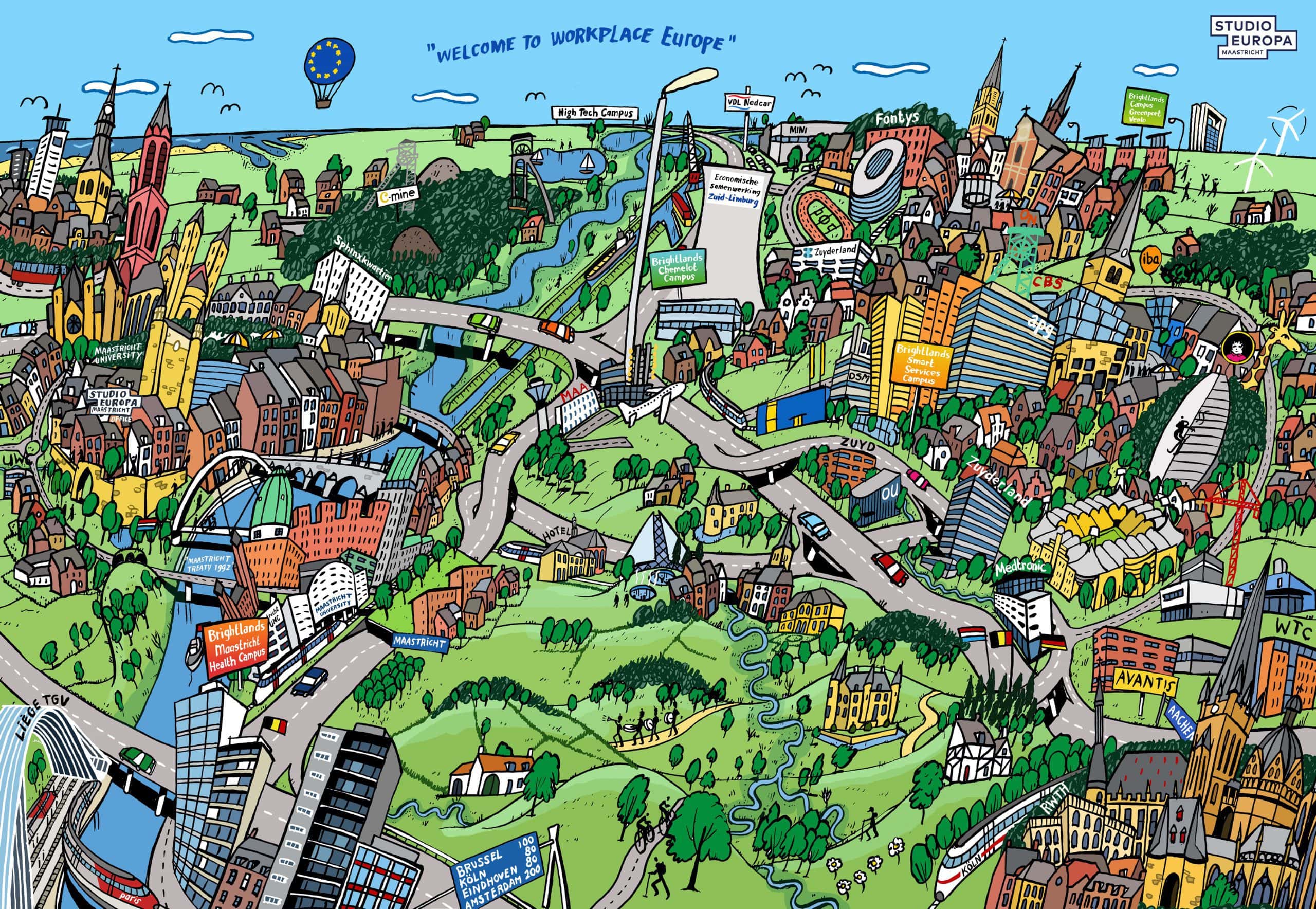 *this blog post was written to inform the participants of Workplace Europe on digital innovation in the Euregion Rhine-Meuse.

Since 1992 Maastricht has been inextricably linked with Europe as the Maastricht Treaty sealed Europeans’ commitment to developing our collective identity. The signing of this milestone for European integration started a great, dynamic experiment, which carries on to this day.

While the Treaty may be the city’s claim to fame, Maastricht’s European character is more than just symbolic. The city is the place for Europeans to come together to work on that experiment. To think, debate and discuss Europe.

This is not a coincidence. Maastricht has always been a city defined by (crossing) borders. For centuries it’s been a melting pot of cultures where different peoples meet, trade, cooperate and, from time to time, wholeheartedly disagree.

To this day, it remains a forum for culture and commerce, and the impact of the surrounding Dutch-, French- and German-speaking industrial and cultural hubs is felt everywhere. At work, in leisure time and education. Maastricht is at the heart of Europe, and the Maas-Rhine Euregion – a territory with 3.9 million inhabitants around the city-corridor of Aachen (Germany), Maastricht (NL), Hasselt and Liège (Belgium).

This confluence continually gives rise to new opportunities, new questions and new ideas. There is no better place imaginable to explore and discuss how European cooperation can contribute to a fair, sustainable, innovative and ethically responsible digital future for Europe. Maastricht, and the Euregion as a whole, are a living lab for Digitial Innovation in a cross-border context. Welcome to our Workplace Europe!

Coal mining dominated the economy of the Euregion for more than 75 years. Mining for coal was so lucrative that large parts of the region adapted everything to this income source. Towards the end of the 1950s, almost 60,000 men worked in the Dutch mines. Also, the regional economies just across the border in Belgium and Germany were highly dependent on the mining industry.

Covered in soot, local men mined the ‘black gold’ shoulder-to-shoulder with labour migrants from countries such as Italy, Greece, Poland and Yugoslavia. Meanwhile, their children went to the same schools, and their families befriended each other. Mining turned the region into a melting pot of cultures – united in diversity.

However, starting in the 1960s, coal production declined as petroleum and natural gas became more common for heating and cooking. The economic prosperity and social cohesion in the region were seriously affected when the mines shut down in the early 1970s in the Netherlands and the 1980s in Belgium.

Despite national governments’ attempts to provide new employment opportunities by moving governmental offices and manufacturing plants to the region, many young people left to find employment elsewhere. A heavily industrialised region that once thrived on fossil fuels was forced to rethink its future within a globalising knowledge economy.

From the national periphery to a highly globalised European nexus

The social and economic trends that have affected the region in recent decades have generated a process of change and renewal. It has enabled Limburg, the most southern province of the Netherlands with Maastricht as its capital, to transform its national peripheral location into a highly globalised European nexus.

The state-owned corporation that once mined in Limburg, DSM, is now a major chemical company, still operating as a major powerhouse of the region’s innovation ecosystem. The so-called “triple-helix” of Brightlands forms the backbone of this ecosystem. Every day 29,000 entrepreneurs, researchers and students work on four different campuses on breakthroughs in sustainability, health and digitalisation. It is one of Western Europe’s most significant innovation clusters.

The Brightlands campuses, several multinationals and the region’s SMEs benefit from its situatedness at the heart of Europe, at a strategic position between the ports of Rotterdam and Antwerp and the European hinterland. It is increasingly transforming to the national epic industrial centre for manufacturing. For decades the region has been a leading ‘cultivating’ region in the AgriFood sector. Furthermore, it is a major logistics hub with its strategic location and infrastructure, its multimodality and a staggering amount of over 100 European distribution centres and is still growing.

The regional powerhouses benefit from the significant number of knowledge institutions nearby. Maastricht University is the most international university in the Netherlands, with over half of its students coming from abroad. In the little over 40 years since its foundation, it has built a reputation for teaching and research, contributing to rejuvenating the city and region, and translating innovation into economic and civic opportunities.

The university collaborates with other universities in the Euregion, such as Hasselt and Aachen. It is the coordinating institution of YUFE: an alliance of eight innovative universities determined to become the first truly European university. It also co-founded and hosts Studio Europa, which aims to position Maastricht as a meeting place for citizen dialogue and debate and establish a Centre of Excellence for Europe and European integration research.

Digital innovation in the Euregion

In recent years, the Euregion has started to flourish as a digital innovation hub. At the RWTH, a technical university in Aachen, researchers work on health care robotics. In Liège, the local university’s business school has set up a transdisciplinary digital lab that is spearheading research and education in digital technologies. At Maastricht University, a Digital Innovation team works on projects that its staff or student experience through digital means. The university is also home to several degree programmes and research groups on the topic. The same goes for a lectorate at the Zuyd University of Applied Sciences, dedicated to researching and stimulating innovative entrepreneurship for SMEs in the region.

The most significant recent development in digital innovation in the Euregion is opening an AI Hub at the Brightlands Smart Services Campus in Heerlen in February 2021.  The AI Hub connects companies, knowledge institutes and other organisations working on AI and data science. The hub focuses on both technical research and research on the application of AI in areas such as public services, public safety, sustainable industry, health and healthcare.

Working on the digital future of Europe

Workplace Europe brings together a representative group of actors that constitute the Digital Innovation ecosystem in the Euregion: from a university start-up to regional and global powerhouses. CGI is a multinational firm working on IT consulting with offices in Maastricht. Heerlen-based DDQ, a globally operating IT services developer for citizen science projects. APG, the largest pension fund in the Netherlands, with its national headquarters in Heerlen. VDL Nedcar, the only large-scale automotive manufacturing company in the country, located about 30 minutes from Maastricht in the town of Born. And NeuroMind, a neurology spin-off of the Brigtlands Maastricht Health Campus.