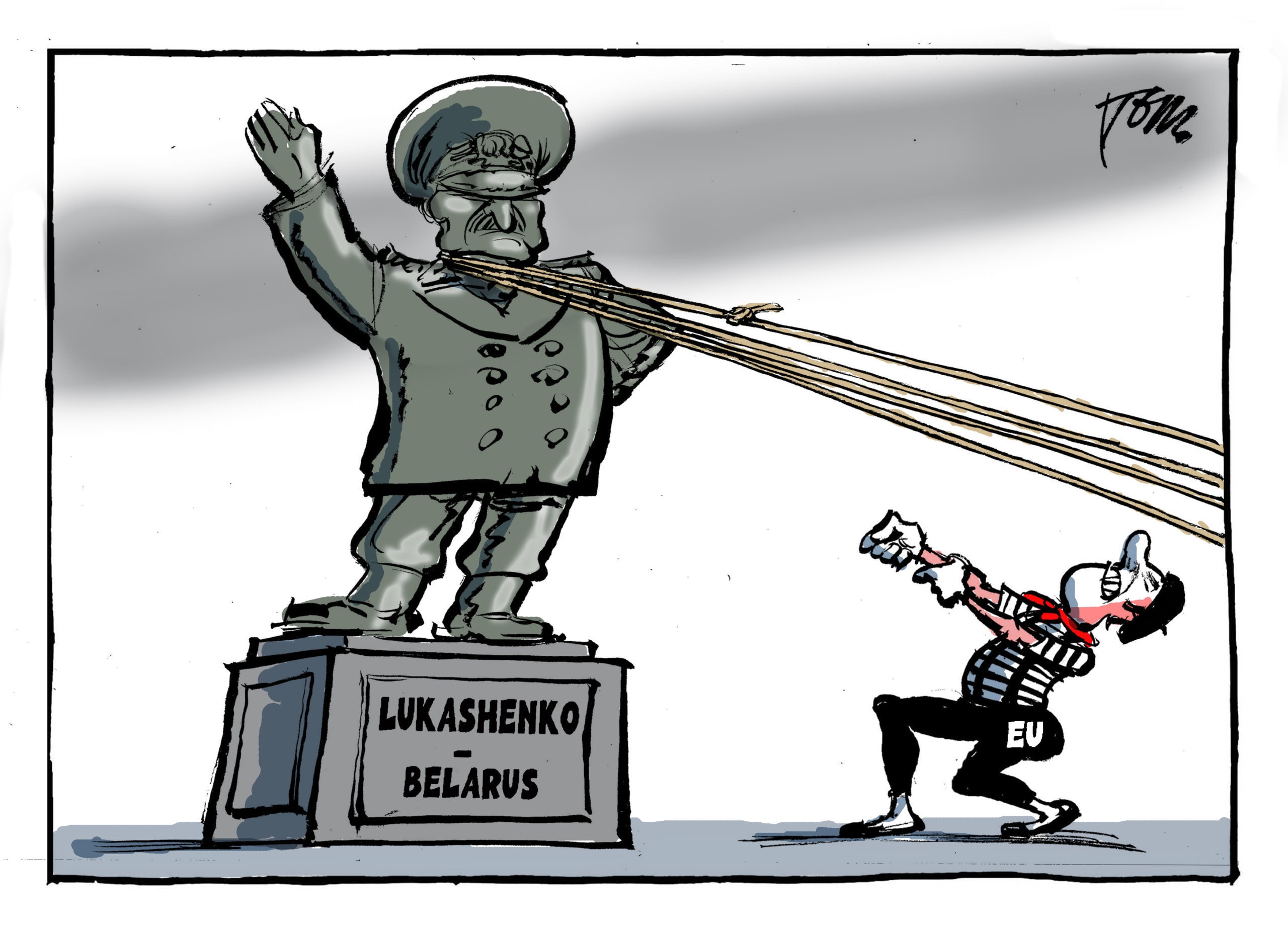 Studio Europa Maastricht and The European Press Prize are pleased to announce the winner and runners-up of the second edition of the European Cartoon Award. With the cartoon ‘EU and Belarus’, published in the newspaper Trouw, Tom Janssen won the first prize of 10,000 euros. The two runners-up are the Dutch Hajo de Reijger and the Turkish Musa Gumus. The work of both cartoonists was published on the online media platform Cartoon Movement.

To introduce to you the winner Tom Janssen we created a video teaching us about the magic of cartoons. Watch it on the website of the European Cartoon Award.

“Editorial Cartoonists have shown us again how they make powerful political commentaries with their drawings. 2020 was the year of the pandemic in Europe, and our shortlist selection and our prize-winner inevitably reflect much of the worldwide economic, social and political debates. But in our other top choices, we wanted as a jury to also reflect on the huge political story taking place in Belarus, and the political reality of how Europe engages with what is just over its borders, and to highlight the importance of the freedom of the media and the violent threats the press faces.”

Janet Anderson, chair of the Panel of judges

After 2 rounds of evaluation, the two juries identified a batch of 16 cartoons that qualified for the final selection. Here is the list of the 14 nominees the cartoons belong to:

Below are the cartoons of the two Runners-up, Hajo de Reijger, with “It’s Chinese!” and Musa Gumus, with “Blood”.

About the European Cartoon Award

The European Cartoon Award was founded by the European Press Prize and Studio Europa Maastricht in 2019 – the year in which the New York Times decided to stop running editorial cartoons altogether. Both organisations aim to award courage and quality in the field of cartooning, encouraging cartoonists to continue their essential task, crucial for a healthy democratic society – both within and outside Europe.

The Librexpression centre has recently joined the ECA as publishing partner.

A word from the organisers

“In these unprecedented times of polarization, there is more and more a lack of understanding for the perspective of the other and a well-founded critical sound. The power of political cartoons is to offer an opening to the truth of the other with irony, humor and sharpness.”

“Cartoonists are an ‘endangered species’: they increasingly face resistance, threats, and sometimes even censorship. Their space is becoming more and more restricted, both in literal ‘airtime’ and in the themes they address. That also applies to cartoonists here in Europe.”