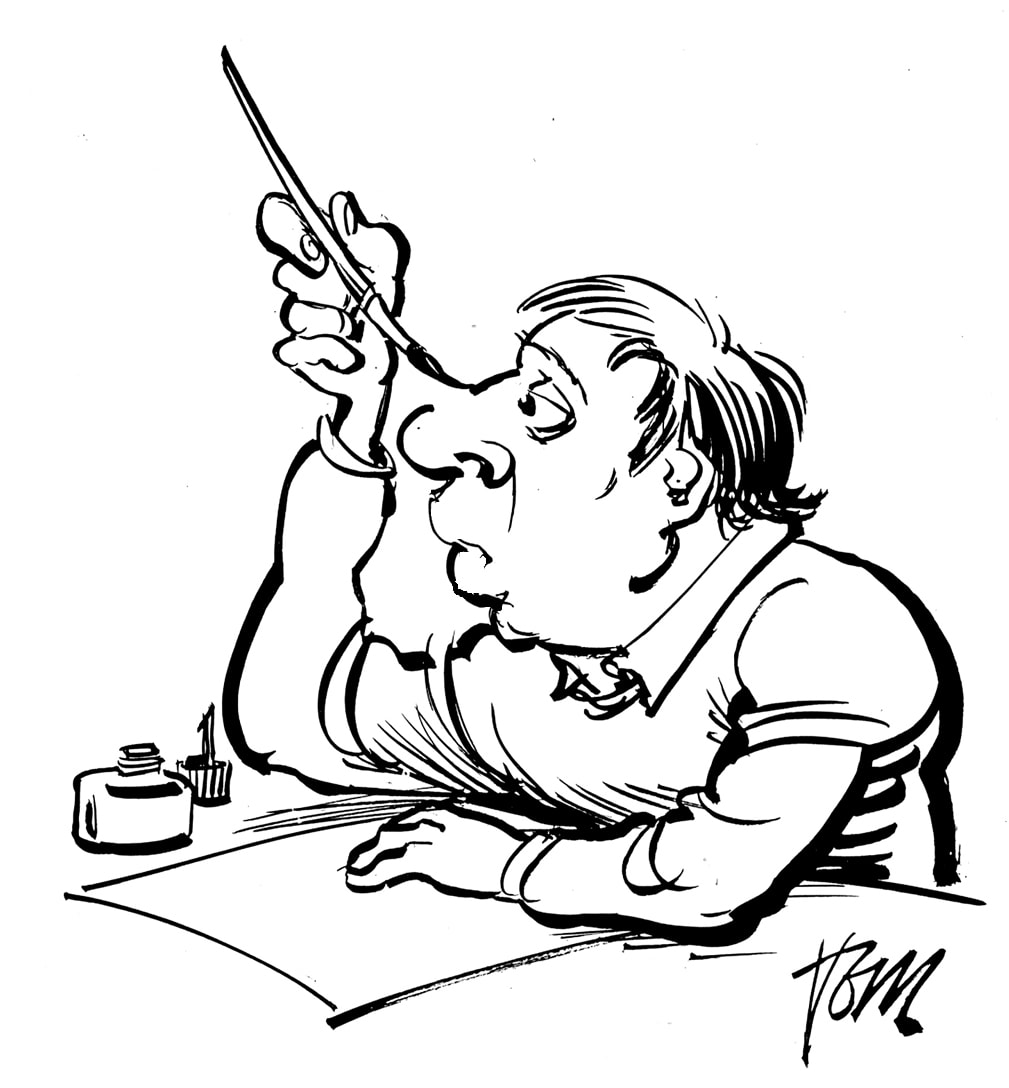 But that doesn’t mean he doesn’t draw what he wants. What makes a good political cartoon? And do cartoonists self-censor to avoid backlash? Studio Europa Maastricht quizzes Tom Janssen, winner of the European Cartoon Award 2021 and longstanding thorn in the side of the powerful. “Our main task is to hold governments to account.”

First of all: what does your winning cartoon tell us?

“I made it in the midst of the anti-Lukashenko demonstrations in Belarus. The European Union has its hands tied on foreign policy; there’s no central power, so member states are on their own. It’s a sorry situation and will always be a frustration for Europe. That’s why I thought the image of a mime artist was appropriate: someone who pretends they can do anything but, in reality, can’t do much at all. The mime struggles against  the statue, a nod to Stalinist regimes and the familiar images of revolutionaries overthrowing dictators.”

How do you come up with your ideas?

“Honestly, I still don’t know exactly how it works. Sometimes I get really stuck in a rut and just can’t get out of it. I usually start by looking for a topic that fits neatly in with the day’s news. Current events are a great way to provide context – that way, I don’t need text to explain the cartoon. I spend a lot of time scouring newspapers, looking for inspiration.

Then I have to figure out whether I have something original to say. This step involves countless hours of thinking, sketching and throwing away. Finally, I get to the hard work of making it funny, which usually only happens when I have about three hours left to file. I need the pressure of the deadline, it makes everything flow better. I often find a good angle at the very last moment.”

Is there such a thing as a boring subject?

“No. It’s always possible to come up with a new, different perspective on an old story. Although, once you’ve been doing this for a while, you do tend to get a feeling of déjà vu with issues that keep coming back. Sometimes I try to stay clear of a particular subject matter, but I think that says something about the issue. Take Brexit. It was such an endless thing, so what new story could I really tell about it? Then again, the sheer repetitiveness can become the topic itself.

What is a political cartoonist’s raison d’être?

“The point is that we critique the government; we punch up. I think that’s our main task as political cartoonists. It’s not about criticising fellow citizens – I don’t know what the point of that is. We’re all already having a hard time living as it is. No, freedom of expression was fought for so that we can criticise the authorities.”

‘There is an enormous amount of visual language in our culture, but that does not mean people always understand it‘

Political cartoonists often face threats, or worse, over their work. Are you censoring yourself?

“I censor myself all the time. Compare it to a family party: you can say what you want there, but you know who you’re talking to, so you tailor your words. I don’t feel like shouting from the rooftops, insisting people have to listen to my opinions. I’m not looking for controversy, I just want to say something in a language people understand. That doesn’t mean you shouldn’t be able to say what you want, of course. I feel like I’m able to say what I want, but I do it in a way that’s not counterproductive.

The reality of political cartoons is that you can express concepts in very stark terms. This sometimes has the side effect of annoying people, and that outrage distracts from the message. It’s so bizarre that some of these cartoons cause a stir; often, they are completely misinterpreted. There’s an enormous amount of visual language in our culture, but that does not mean that people always understand it. People are often already primed to interpret  your work in certain ways. Sometimes, I ask myself: have they actually seen what these cartoons are about?”

If you don’t aim to be controversial, how would you describe your style?

“I work anecdotally. I draw everyday, ordinary situations. It’s important that people recognise themselves, so I like to keep my cartoons grounded. I’m not very good with big, symbolic images – I feel a certain embarrassment about them. With symbolism and grand gestures, you become almost like a missionary, and that doesn’t suit me at all. I even find it a bit lazy.

The fascinating thing about news is that so many events are full of different dilemmas, full of tricky choices that make you say afterwards: how could anyone navigate that? Those countless, often small, decisions are way more exciting. After all, we all believe in world peace and a clean environment when those ideas are painted in broad brushstrokes.”

You have won almost all the major awards you can in this job. Do you ever think about quitting?

“I don’t know anyone in this line of work who wants to stop! It’s always relevant and manages to be the perfect combination of politics and playfulness. It is a wonderful profession.”

Tom Janssen (1950) is a political illustrator for Dutch national newspaper Trouw and a number of regional publications. His work is also published in foreign newspapers, such as The New York Times and Le Monde. He is the winner of the second edition of 2021’s European Cartoon Prize and has won the Inktspotprijs, the Dutch prize for the best political cartoon, twice.

The European Cartoon Award was founded by the European Press Prize and Studio Europa Maastricht in 2019 – the year in which the New York Times decided to stop running editorial cartoons altogether. Both organisations aim to award courage and quality in the field of cartooning, encouraging cartoonists to continue their essential task, crucial for a healthy democratic society – both within and outside Europe. Visit the European Cartoon Award website for more information.