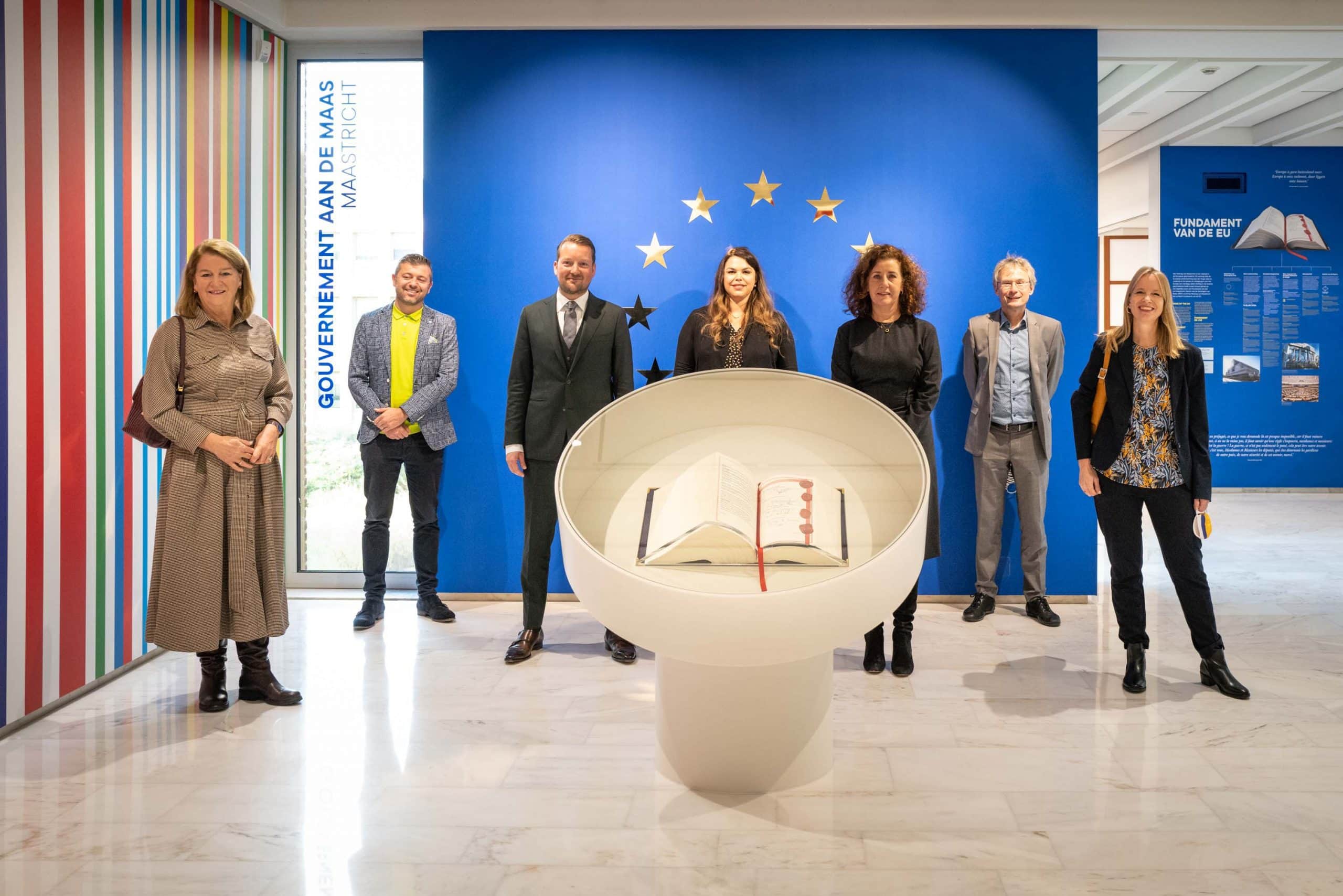 On Monday, 8 November, the kick-off of the 30th Anniversary of the Maastricht Treaty took place. Present at the event were the Limburg provincial executive Maarten Van Gaans, Mayor of Maastricht Annemarie Penn-te Strake and, on behalf of the Executive Board of Maastricht University, Dean Christine Neuhold. During the kick-off, Minister van Engelshoven of Education, Culture and Science opened the permanent exhibition on the Maastricht Treaty in the Gouvernement aan de Maas, the province house of Limburg.

Starting in December and continuing throughout the celebration period of the 30th Anniversary of the Maastricht Treaty, Studio Europa will dive into history to investigate the Treaty’s impact. ‘A moment of reflection, but also an opportunity to start a conversation about the future of Europe’, Gonny Willems, Director of Studio Europa Maastricht, said during the presentation of the Re:Generation Maastricht programme. ‘The exchange between generations is central during the anniversary activities and events.’

The Maastricht Treaty led to the creation of the European Union and laid the foundation for the European Economic and Monetary Union. In 2018, the Treaty was awarded the European Heritage Label by the European Commission. This prestigious distinction was extended for an additional four years in March 2021, in part due to the fruitful collaboration between the municipality, province and university in the Maastricht, Working on Europe programme.

In the context of the Heritage Label, a permanent exhibition has been opened in the province house. ‘Maastricht is the source of European unification’, said Minister van Engelshoven in a speech before the opening of the exhibition. In conversation with regional broadcaster L1, provincial executive Maarten van Gaans explained the extra significance the Treaty has in the region: ‘It is especially important for Limburg, the most international province of the Netherlands.’

In the programme of the anniversary celebrations, Studio Europa emphasises the importance of the 30th Anniversary of the Maastricht Treaty. Together with the inhabitants of Maastricht, Limburg, the Euregion and beyond, the value and relevance of the Treaty for society will be explored together with the challenges for the future.

The Re:Generation Maastricht programme calls on all ages to work together for a better Europe. The exciting and thought-provoking agenda is packed with events including the Princess Beatrix Lecture on 10 December, a European citizens’ summit in January, the celebration of 30 years of the euro in early February and a concluding programme in May.

The exhibition in the Gouvernement aan de Maas is not only a trip to the past, but also a look to the future. ‘The importance of European cooperation extends across generations’, the provincial executive said in the interview with L1.

‘Most young people take the European Union for granted, but we really shouldn’t. It is something to continuously fight for, keep working for.’ Minister van Engelshoven echoes this message in another interview with the regional broadcaster: ‘It is very good that the city, province and university are looking to the future and working hard to keep the debate on Europe alive.’

‘It is very good that the city, province and university are looking to the future and working hard to keep the debate on Europe alive.’