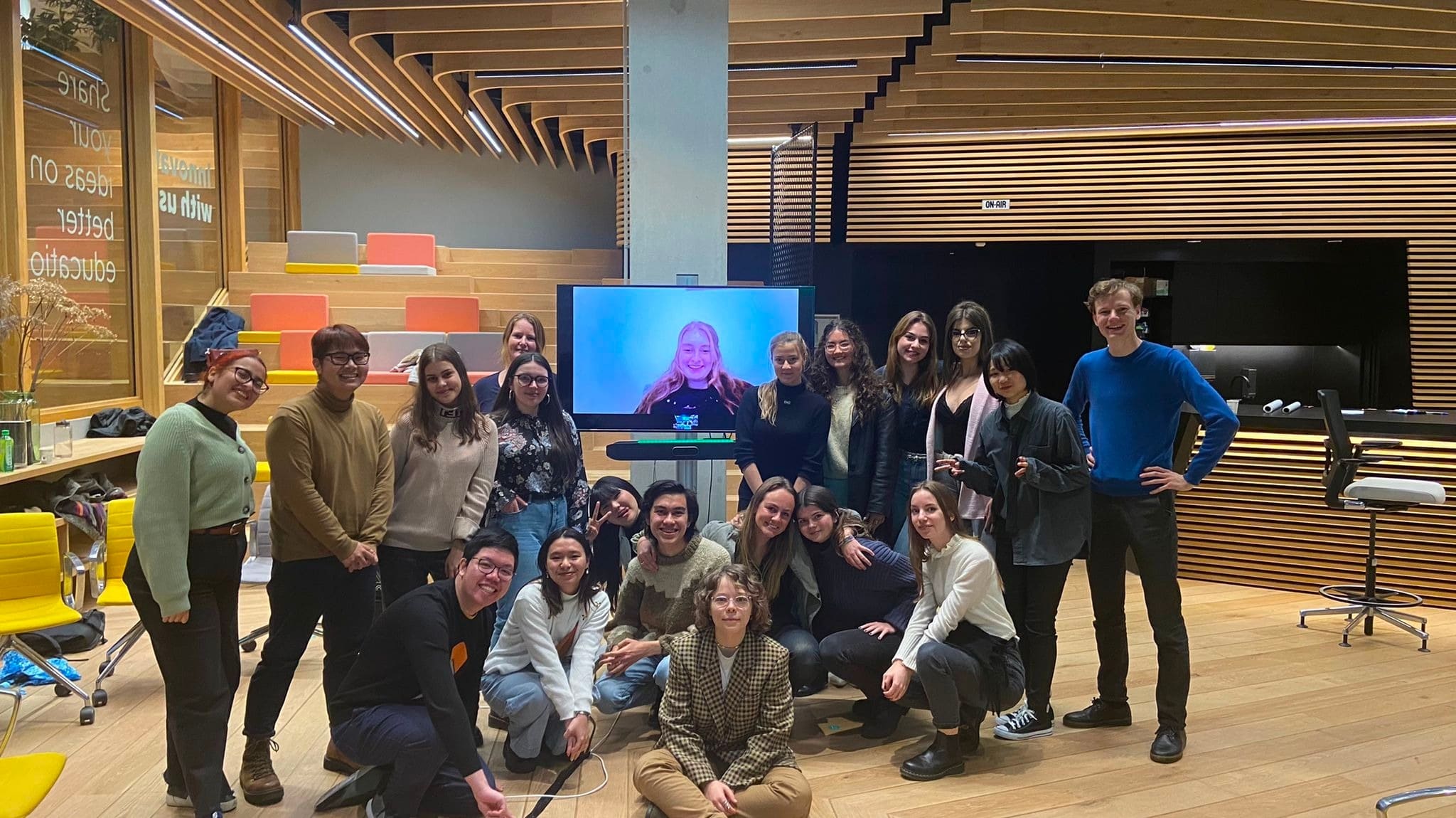 Does Europe exist? And if so, where can we find it and how can we recognise it? These are some of the central questions addressed in the module ‘Telling the Stories of Europe’, part of the honours programme of the EUR International Bachelor Communication and Media. Last month, nineteen EUR students visited Maastricht and Studio Europa to explore the value of stories and storytelling for the future of Europe. They then turned their observations into creative multimedia projects. The visit and module were organised by Job Zomerplaag, programme editor at Studio Europa Maastricht and part-time lecturer at Erasmus University Rotterdam.

Telling the stories of Europe

The storytelling module is offered as an extracurricular course to the programme’s most motivated and talented students and is coordinated by Dr Mijke Slot. In the module, students approach the European Project as an unfinished adventure. They head off on this adventure by examining the ancient Greek story of Europa and the Bull and the significance of this myth in modern Europe. They then travel through time and space to explore some of the stories and symbols, as well as their creators, which paved the path towards the Maastricht Treaty. For example, the origins of the 12-star flag and Ode to Joy anthem are studied. In so doing, the students reflect on the distinguishing characteristics of Europe and being European. What myths and symbols have fostered a sense of community in Europe and how have they evolved over time?

Visit to Maastricht and Studio Europa

As the course was designed to be an adventure, the students travelled to Maastricht, the city where the foundation treaty of the EU was signed was 1992. During this two-day trip, they saw first-hand how the European Project is alive and well in Maastricht, a city which positions itself as ‘the city of the European citizen’. The honours students visited Studio Europa Maastricht to learn more about its research agenda, the activities organised to bring the heritage of the Maastricht Treaty to life, as well as the events and projects being organised to instigate the public debate on European integration. They also visited the European Institute of Public Administration and participated in a historical tour organised by the city guides of Meet Maastricht.

During their stay, Maastricht served as the students’ living laboratory to collect and create stories. They also met with storytellers and researchers to discuss how stories can reveal the way in which the idea of Europe is promoted, shaped and contested locally. In the setting of a so-called vlaaien panel (named after the local delicacy vlaai), the students participated in a discussion with Lars Boering, director of the European Journalism Centre; Eline Schmeets, a PhD researcher in cultural studies and political aesthetics at Studio Europa; and Floor Krooi, a film producer overseeing the production of the documentary film ‘The Europeans’. After this event, the students were guided through the city by poet Amber-Helena Reisig and documentary maker Carolin Riethmüller.

Students tell their own stories of Europe.

After they visited Maastricht, the students participated in a workshop hosted by Mick ter Reehorst, founder and managing director of the pan-European media collective Are We Europe. With his help, the students turned the inspiration and observations they collected during the previous weeks into a final project: telling their own stories of Europe. Stories that reflect upon their stance towards Europe; stories that raise topics that need to be included in the existing discourse and critically engage with the idea and identity of Europe.

The module was concluded with an intimate storytelling event organised at the Education Lab of Erasmus University in Rotterdam. Mr Didier Herbert, head of the Permanent Representation of the European Commission in the Netherlands, attended the event alongside some of the people the students had met throughout the course. The stories display the students’ ability to critically reflect on the notion of a ‘Story of Europe’ and to engage with past and current efforts to tell this story. In addition, their own stories displayed how incredibly diverse presentations and representations of European identity could and perhaps should be.

The stories were presented in different formats, ranging from multimedia to video. Please find links to all the student projects below:

Our Europe: Bridging the gap between being European and being a global citizen

Based on their observations in Maastricht, Lizzie van Duijn (Dutch-Canadian), Mara Potinteu (Romanian), Isa Schuit (Dutch), and Hyewoon Yun (South-Korean) argue that to be ‘European’ is to be ‘coexistent’. Their project discusses and celebrates similarities and differences between different countries. Through an interactive map, they present sites in South Korea, Romania, Canada and Spain that align with such places in Maastricht: fountains, squares, churches, and community centers.

Europe: Reunited in its flaws

The story of Europe is flawed, Julia Kippers (Dutch), Mayra Nassef (Egyptian by birth but grew up in Dubai), and Quynh Dang (Vietnamese) argue in their final project. Through studying Europe as a puzzle, they find that there is a piece missing. Their project shows that by framing Europe as flawed, it will be more credible, real and relatable. They point to the media as a key player in telling this flawed story.

Europe on a screen: What is Europe?

Starting from the simple question of “what is Europe?”, Anna-Lena Rösner (German), Iris Tensen (Dutch), and Julia Korn (Dutch) show that the story of a Europe is nuanced. One that is neither perfect, nor completely bad. They explain why they think we need to embrace the mess, the problems, the conflicts, and the crises. Their project is critical yet hopeful and argues that through new narratives, movements, and voices, we can transition from “Europe is problems”, to “Europe is solutions”.

The Story of Europe: The Ideal and Struggle

Embarking from the question “where is Europe”, Ira Lizenko (Ukrainian), Nana Huang (Chinese), and Anna Galtsova (Ukrainian) discuss the European ideal and struggle through videos, essays, and poetry. They argue that while the 1992 Maastricht Treaty moulded the EU ideal, the 2020s Maastricht is rendering it as a reality. They then take the reader to the peripheries of Europe to reimagine the EU from and beyond its “borders”.

Elliot Zepeda Kim (Chilean), Minh Nguyen (Vietnamese), and Julia Rozentsvit (Russian) explore the topic of queerness in Europe as bartenders of their own virtual gay bar. Their story features interviews with four young people on being queer in Europe. In their virtual bar, they discuss how someone’s sexual orientation may intersect with feeling European.

Our Role in Europe: Journey to the Land of Europe

Searching for Europe felt for Khanh Chu (Vietnamese), Anouk Pruijsers (Dutch), and Hagar Eita (Dutch-Egyptian) like being characters in a role-playing game. Inspired by video games and medieval times, they wrote a storyline for their journey to the land of Europe. In their story, the reader follows the perspective of the wandering bard, the enchantress, and the knight.

Would you like to learn more about the content and programme of the module? Then do not hesitate to contact Job Zomerplaag, programme editor at Studio Europa, for more information.