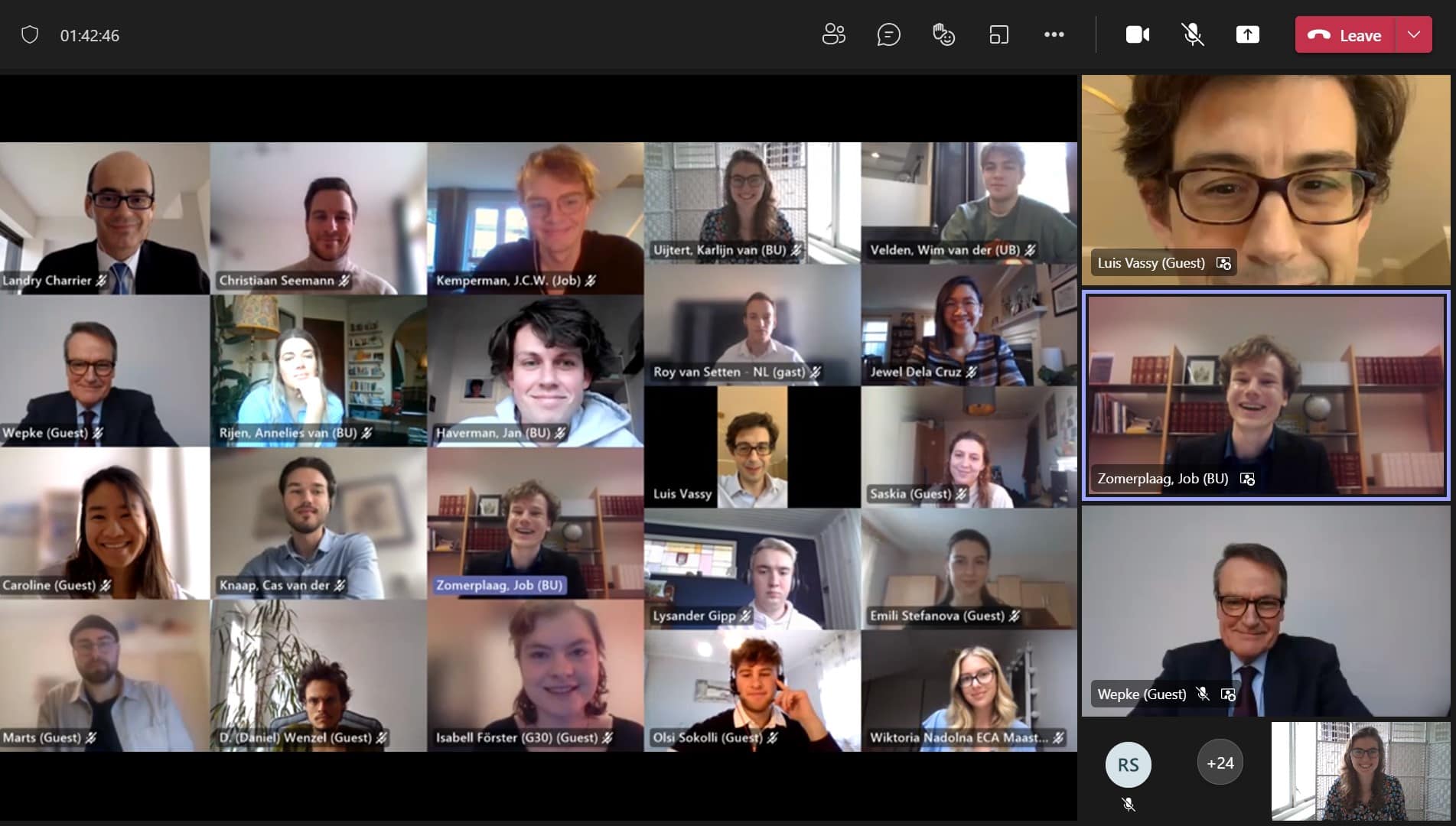 Last Friday, in light of the Conference on the Future of Europe, a diverse group of 30 Maastricht University students from 19 countries (the so-called G30) had an online meeting with France’s Ambassador to the Netherlands, Luis Vassy, and Wepke Kingma, Special Envoy for the Conference on the Future of Europe at the Dutch Ministry of Foreign Affairs. The event’s main theme was the French and Dutch perspective on citizens’ participation in defining Europe’s future. While Mr Vassy reflected on the French Presidency of the Council of the European Union and its priorities, Mr Kingma shared his experiences as Special Envoy. Additionally, Mr Kingma shared the findings of the Dutch programme Kijk op Europa (Outlook on Europe) that took place in the framework of the Conference.

Recovery, Strength and a Sense of Belonging

Together with members of the G30, the two speakers discussed different ways to make the European Union (EU) more inclusive and participatory. According to Mr Vassy, the French Presidency of the Council initiated the programme Recovery, Strength and a Sense of Belonging with this goal in mind. He believes that a sense of belonging in Europe is vitally important to the success of participatory democracies and, therefore, key to the presidency. Europeans should be able to define themselves instead of giving others the opportunity to define them, he explained. Mr Vassy went on to state that the cornerstone of European identity should be based on intellectual and moral grounds, individual freedoms, rule of law and a democratic way of living.

Whereas Mr Vassy shed light on the French perspective on the Conference on the Future of Europe, Mr Kingma explained the Dutch point of view. In his role as Special Envoy, Mr Kingma organises citizens’ dialogues throughout the country and represents the Netherlands at Conference-related meetings internationally. ‘I am fortunate to be involved with the future, rather than the past, at the end of my career’, he said minutes before the start of the meeting. As adviser for Kijk op Europa, Mr Kingma shared meaningful conclusions about the research that was done as part of the programme. According to the Special Envoy, Dutch citizens generally feel favourable about membership in the European Union. They believe that the EU should have, among other things, jurisdiction in the fields of climate change, security and migration; but they also argue that decision-making is slow and exclusive.

An instrument that could address the exclusivity of EU decision-making is the European Citizens’ Initiative (ECI). At the request of one of the students, Mr Kingma discussed his opinion on its potential. According to the Special Envoy, the ECI is not a living instrument and strengthening the mechanism would require treaty change. ‘First, we have to listen to what the citizens want’, he said, ‘but if changing the instrument is what citizens want, we should look into it.’ While the new government coalition in the Netherlands has stated that it is open to treaty changes following the Conference on the Future of Europe, Mr Kingma noted that such changes take a long time. ‘And that is not necessarily what Dutch citizens desire, they want quick answers’, he concluded.

In answer to another student’s question, the speakers pointed out that despite French and Dutch citizens having overall positive attitudes towards the EU, neither country has been immune to Euroscepticism. The two believe there is an important role for the Conference in dealing with this issue. Mr Kingma feels that the root for Euroscepticism lies in the government’s inability to address certain concerns among the public. Additionally, he thinks the question of sovereignty attributes to the trend. According to the Ambassador Vassy, the same causes can be identified in France, where ‘people don’t like to see sovereignty pooled together’. To tackle Euroscepticism, the French Ambassador continued, transparency and democracy, as well efficiency is required. Mr Kingma believes that the Conference can be a step in the right direction: ‘The best way to combat Euroscepticism is to address big problems. The Conference on the Future of Europe is a good method to see what a broad assembly of people think, what they want. I hope the Conference is part of the answer.’

From 11-13 February, the third session of the fourth citizens’ summit of the Conference on the Future of Europe takes place in Maastricht. The citizens’ panels in Maastricht will become a platform for addressing the topics EU in the world and migration. Two hundred participants will engage with each other at conference centre MECC. Translations will be provided directly into the 24 official languages of the EU, making this a truly European event.