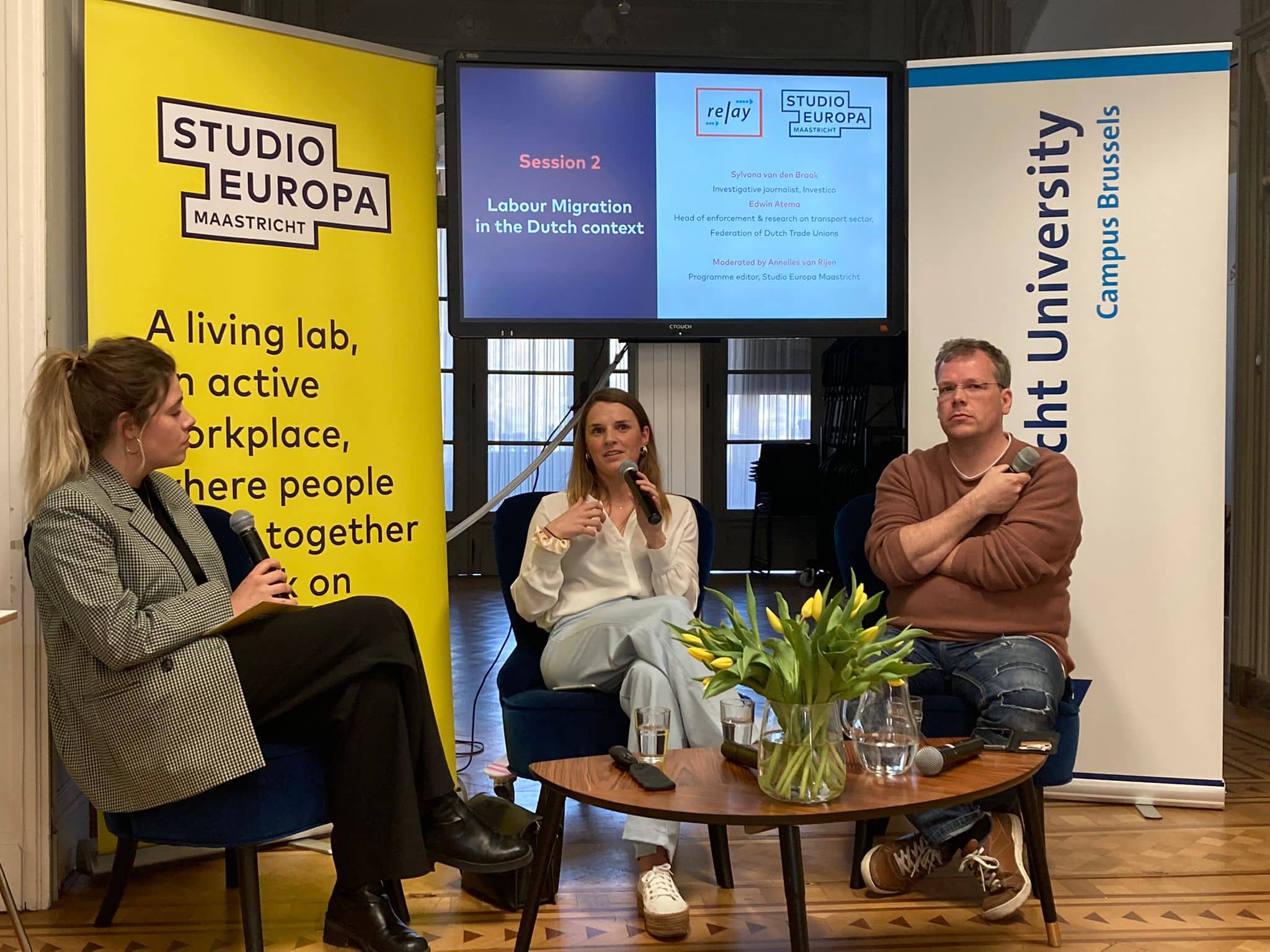 On March 24 at the Maastricht University campus in Brussels, Studio Europa Maastricht opened the floor to discuss how Europe’s unique social model and the European Pillar of Social Rights can be utilised to improve the inclusion of labour migrants in our societies, stop labour exploitation of migrant workers and ultimately provide better labour market outcomes and improve social cohesion for everyone. Experts, policymakers, trade union representatives, politicians and citizens shared their views during the event ‘The Missing Puzzle Piece: reconciling labour migration and the European social model’.

The first session of the event focused on the free movement of workers, unstable employment, and social rights with researchers Mattia Di Salvo, Dr. Anita Heindlmaier and Giacomo Boffi. During the session, the experts explained how the labour market chain works when there is a shortage of workers in the countries of origin. Solutions were also proposed to the problem of EU mechanisms trying to escape the rules introduced and, in the words of Dr. Heindlmaier, how these solutions could avoid “the endless cat-and-mouse game.” Mattia Di Salvo’s solutions also explained how the chain works and how switching to a “skills-based approach,” where skills are tailored to the needs of the EU market, could break the chain. Giacomo Boffi, clarified the problems of the labour market in the context of the Netherlands as temporary workers can “end up in a loophole” which could lead to their social exclusion.

In the next session research journalist Sylvana van den Braak and head of enforcement of the Dutch Federation of Trade Unions Edwin Atema discussed labour migration issues in the Dutch context, across sectors and over time. Edwin highlighted with many examples from the ground how migrant workers are treated and how “their dream to work in Europe ends in a nightmare” once they sign a contract that binds them economically to their employer without a way out. With concrete examples from investigative journalist Sylvana van den Braak, the session also shed light on how workers are at risk for exploitation and how companies do not take responsibility for this because of a lack of law enforcement and the liberal labour market constructions in the Netherlands. Finally, asked about the actions taken by the EU to address labour exploitation, Edwin answered there were “none” and talked about the lack of infringement procedures against member states that did not do enough to protect workers in line with EU directives. On the contrary, Edwin talked about an infringement procedure that was started by the European Commission against Germany over competition concerns since Germany decided to come up with minimum wage for roadworkers.

The last session consisted of a dialogue between Joost Korte, Director-General of DG Employment, Social Affairs and Inclusion, Jeroen Lenaers, CDA Member of the European Parliament from Limburg and Wouter Zwysen, senior researcher at the European Trade Union Institute. Together they continued the discussion of the previous speakers and talked about the implementation of the European Pillar of Social Rights, the protection of workers and cross-border solidarity in the internal market and the social integration of migrant workers in European societies. The session discussed the European Social Model and whether it meets it expectations. In line with this, the mechanisms of the EU were evaluated, since, according to Joost Korte, the past crises have shown the strengths and shortcomings of these mechanisms.

What is RELAY?
This programma was part of the RELAY project, organised with the support of the Erasmus+ programme of the European Union. RELAY is a project that aims at discussing the European Commission’s political guidelines and work programme with a wide and diverse array of stakeholders. It is coordinated by Maastricht University Campus Brussels and includes several academic and non-academic partners. Studio Europa Maastricht is a key partner in the project.

* This programme was organised by Studio Europa Maastricht. The European Education and Culture Executive Agency (EACEA) and the European Commission are not responsible for the content of this newsitem or any use that may be made of the information it contains.