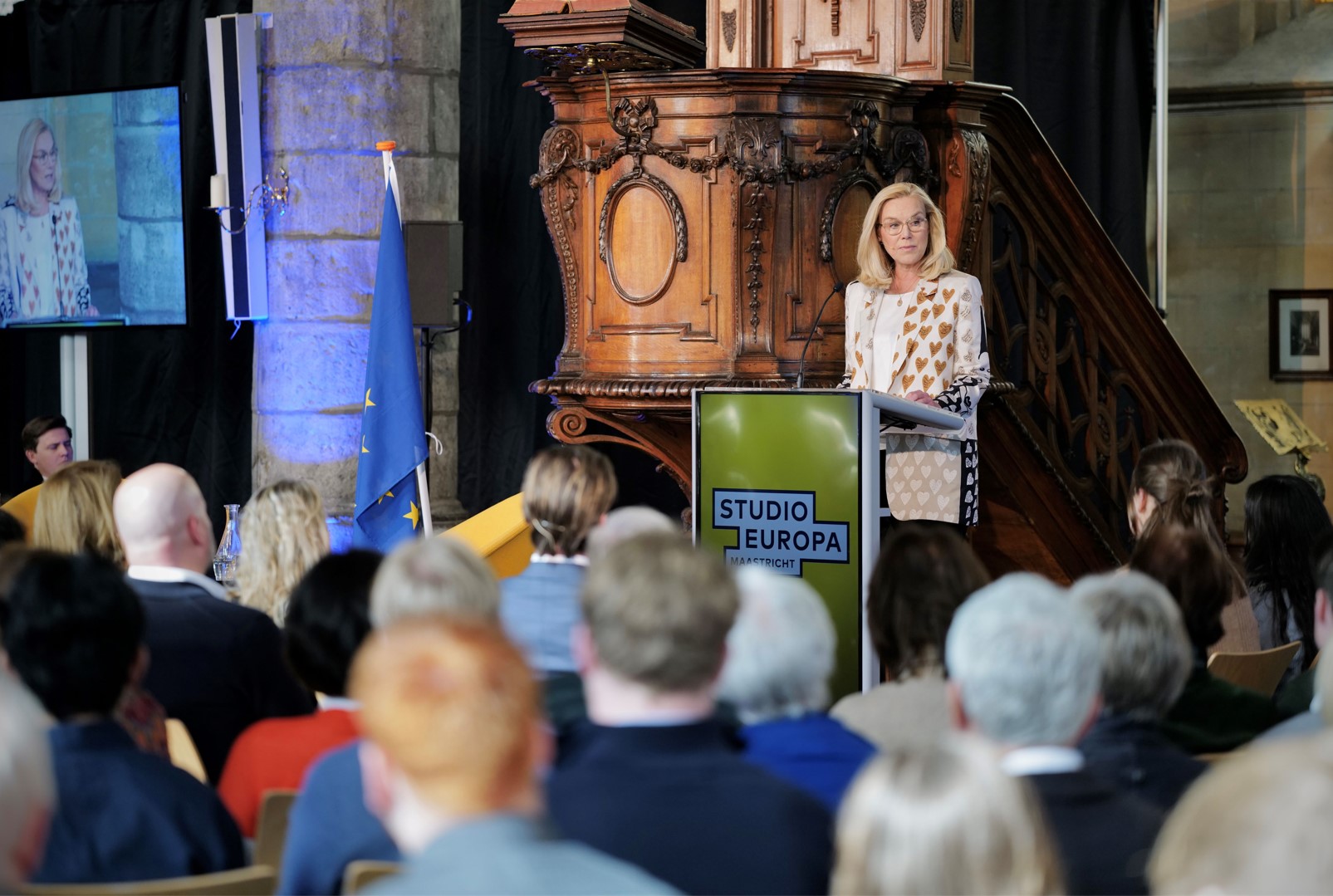 On a sunny Tuesday afternoon in early March, the Dutch Minister of Finance, Sigrid Kaag, addressed an audience in Maastricht’s Sint Janskerk. In her speech, she shared the newly appointed Dutch cabinet’s – and her own – vision on the future of the European Union (EU). In addition to discussing the Stability and Growth Pact in which the European fiscal rules have been formalised, Minister Kaag spoke about the war in Ukraine, the need for the EU to become independent from Russian gas and the climate crisis. After the speech, Mathieu Segers, professor of contemporary European history and integration at Maastricht University and Europa Chair at Studio Europa Maastricht, led a discussion with the minister. There was also time for questions from the audience, an opportunity that both students and older attendees took advantage of.

The war in Ukraine

Although not part of her original plan, Minister Kaag was obliged to mention developments in Ukraine during her speech in Maastricht. ‘When I accepted the invitation to come here today to talk about European unity, we all believed that war on this continent was a thing of the past. t’, the minister said at the start of her speech. ‘Putin’s invasion comes as a rude awakening’, she later concluded.

According to Minister Kaag, the outbreak of war in Ukraine is an opportunity to continue the level of ‘unanimity and decisiveness’ in the EU that has never been seen before. ‘This unprecedented crisis demands another type of Union. A Union which does not muddle along but looks ahead..’ She also addressed the Euroscepticism that exists in the Netherlands: ‘the notion of the European Union as a partnership isn’t a question but a fact. It is the institution which we in the Netherlands must commit to fully, because this is also in our national interest.. She even sees a leading role for the Dutch government in this: ‘The present government wants to play a leading role in shaping a strong and effective Union.’.

The geopolitical role of Europe

Minister Kaag stated that the cabinet has three priorities: the geopolitical role of Europe, financial cooperation within Europe and climate change. ‘In normal times my priority as Finance minister would be financial stability. But these are not normal times. Europe’s main concerns and tasks lie in the geopolitical arena..’

According to Ms Kaag, Europe ‘as one of the largest economies in the world’ should focus on the implementation of economic sanctions. ‘Economic sanctions entail costs, but we should not be afraid of their impact on us. Anything we feel will be felt much harder by Putin and his clique.’ Europe will also have to cooperate better on a military level: ‘As a Union we must be more capable of resolving conflicts on our own.  […] The Netherlands wants to do its part for a stronger European defensive partnership: a stronger Europe within NATO..’ Finally, Minister Kaag wants the EU to dare to be ‘a power political factor’. ‘We are, therefore, committed to abolishing the right of veto on sanctions, human rights violations and civilian missions.’

The Stability and Growth Pact

While it seems less relevant in times of war, the minister wanted to emphasise financial stability in Europe. ‘It may seem uncomfortable to talk about money, about prosperity and welfare during such a political and military crisis. At the same time, it is precisely what people are concerned about.’ The current turmoil in the world has weakened European economies. ‘After a long period of low inflation and low interest rates, these have already increased. This affects people’s purchasing power, and countries see the interest on their national debt rise’, said the finance minister, and ‘the war in Ukraine will further worsen this.’

That is why Minister Kaag will discuss the modernisation of the Stability and Growth Pact in the near future. ‘It is in everyone’s interest that public finance in the euro countries are in good shape. […] We desperately need that foundation, especially in unstable times.’ In 1997, the EU member states agreed that their budget deficits would not exceed 3% of national income, and that national debt would not exceed 60% of national income.

During the review of the pact, the Dutch Finance Minister will stick to a number of pillars. According to Minister Kaag, the reduction of national debt should not only be achieved through austerity measures, but also through reforms and investments. ‘High-debt member states must return to a sensible level at a responsible pace, and this cannot be achieved only through budgetary measures.’ There will also have to be room for flexibility in the rules: ‘In recent years, European fiscal rules have demonstrated their flexibility in extraordinary circumstances.’ Finally, the pact will have to be applied ‘consistently, transparently and predictably’. ‘In this way, the Stability and Growth Pact can once again function as intended – and contribute to a healthy European economy.’

In addition to geopolitical influence and financial stability, Minister Kaag argued for less dependence on fossil fuels. ‘Putin has shown that he is able and willing to use the gas tap as a political instrument.’ According to the minister, gas imports from Russia must be reduced. Energy would thus not be a ‘source of tension’ but become one of ‘progress’.

The minister also advocates ‘large-scale action’ in the field of climate change. ‘We will have to change our behaviour; and by we I certainly do not mean just the individual citizen, but above all governments and polluting industries.’ The minister sees a significant role for the financial sector in this: ‘Money flows steer the economy, so if we finance sustainable initiatives and not polluting ones, this has a major impact’.

The ambitions that the European Commission has for tackling the climate problem can count on support from the Dutch government: ‘To underline this, we want to be a frontrunner in Europe’. ‘This cabinet stands for a European future with an outstretched hand to our brothers and sisters inside and outside the Union.’ With these words, Minister Kaag concluded her lecture.