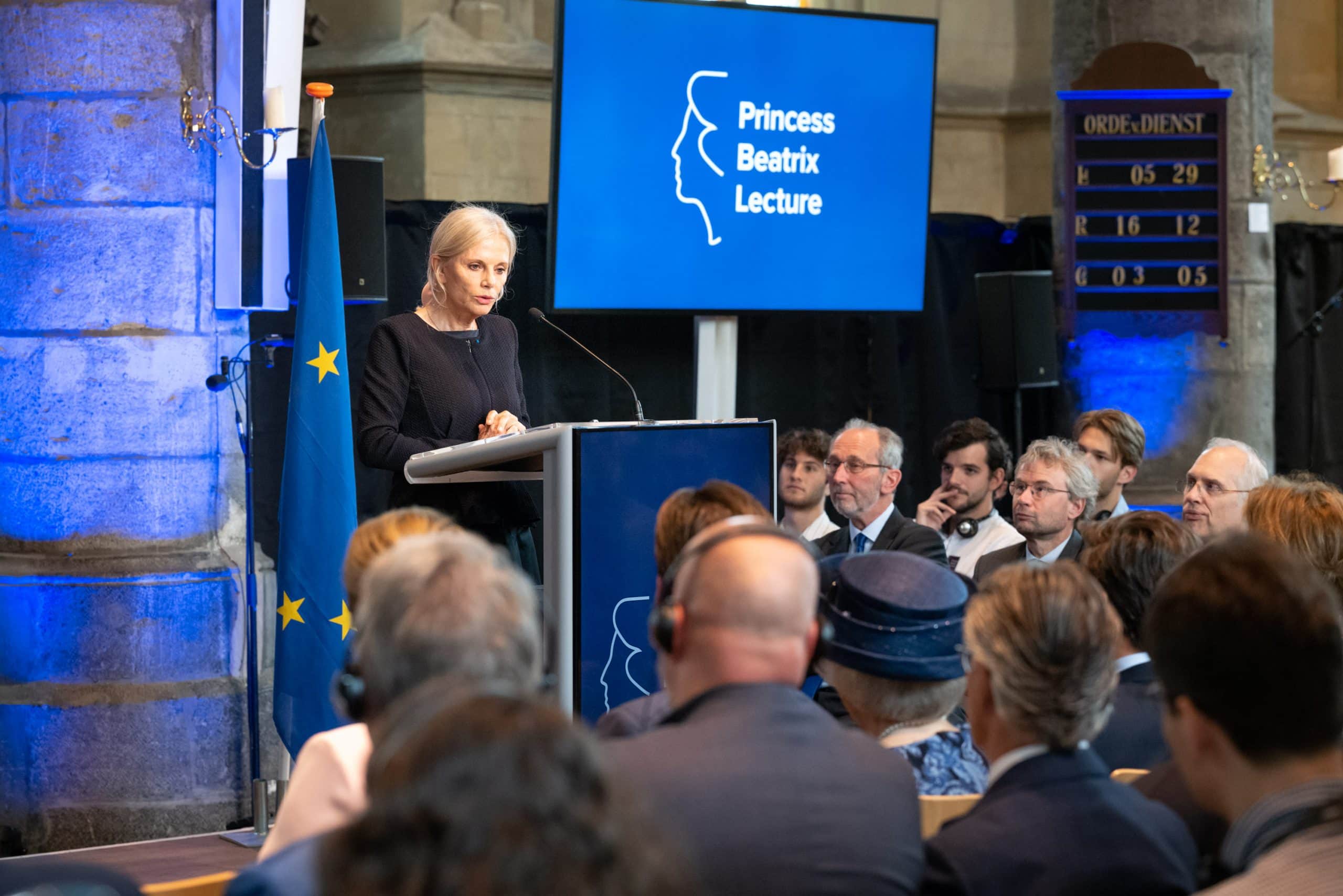 On Friday 3 June 2022, former French Minister of European Affairs, Élisabeth Guigou, delivered the inaugural Princess Beatrix Lecture (PBL) in Maastricht in the presence the princess herself.

The inaugural lecture of the PBL was given by Ëlisabeth Guigou. As French Minister of Foreign Affairs (1990-1993), she was closely involved in the negotiations that culminated in the Maastricht Treaty as well as a trusted adviser to French President François Mitterrand. In her speech Guigou looked back on the years in which the treaty was concluded and the way in which European cooperation has developed since then.

In her speech Élisabeth Guigou reminded the audience of the important contribution the then queen of The Netherlands played in the negotiations. According to Guigou she the head of states “the order to make the Maastricht Summit succeed” during a lunch that was organised at the Château Neercanne.

The historical context of the Maastricht Treaty

She also emphasised that the importance of the Maastricht treaty cannot be understood without understanding its historical context. The Single European Act (1986), for example, ‘’would pave the way for the European Union’’. While at the same time, the political revolutions in East and Central Europe around 1988 and 1989 ‘’made us [the Western European political leaders] realise that a political union and single currency were more pressing than ever.’’

Besides the historical context, the political willingness of European leaders was essential in the singing of the Maastricht Treaty. ‘’Our Europe is a story of consecutive compromises’’, Ms Guigou said. ‘’The reason we progressed is because Francois Mitterrand and Helmut Kohl [Former Chancellor of Germany], among others, made sacrifices domestically’’. In Germany, the creation of the single currency was met with fierce resistance by the public, coalition partners and the German central bank. Nonetheless, ‘’the Chancellor agreed [upon the establishment of the European Monetary Union], because there was a sense of urgency.’’

Legacy of the Maastricht Treaty

At the end of her speech Ms Guigou reflected on the legacy of the Maastricht Treaty. Firstly, according to her, its legacy lies in solidarity: ‘’How would we have handled Brexit without the solidarity that was constructed through economic and social cohesion?’’ Furthermore, security: ‘’The Maastricht Treaty was the first text in which a common foreign policy and European defence was envisaged that today is indispensable.’’ But above all, the legacy lies in the spirit of the treaty. ‘’I believe that it’s this spirit that can overcome the current challenges in Europe’’, Ms Guigou concluded.