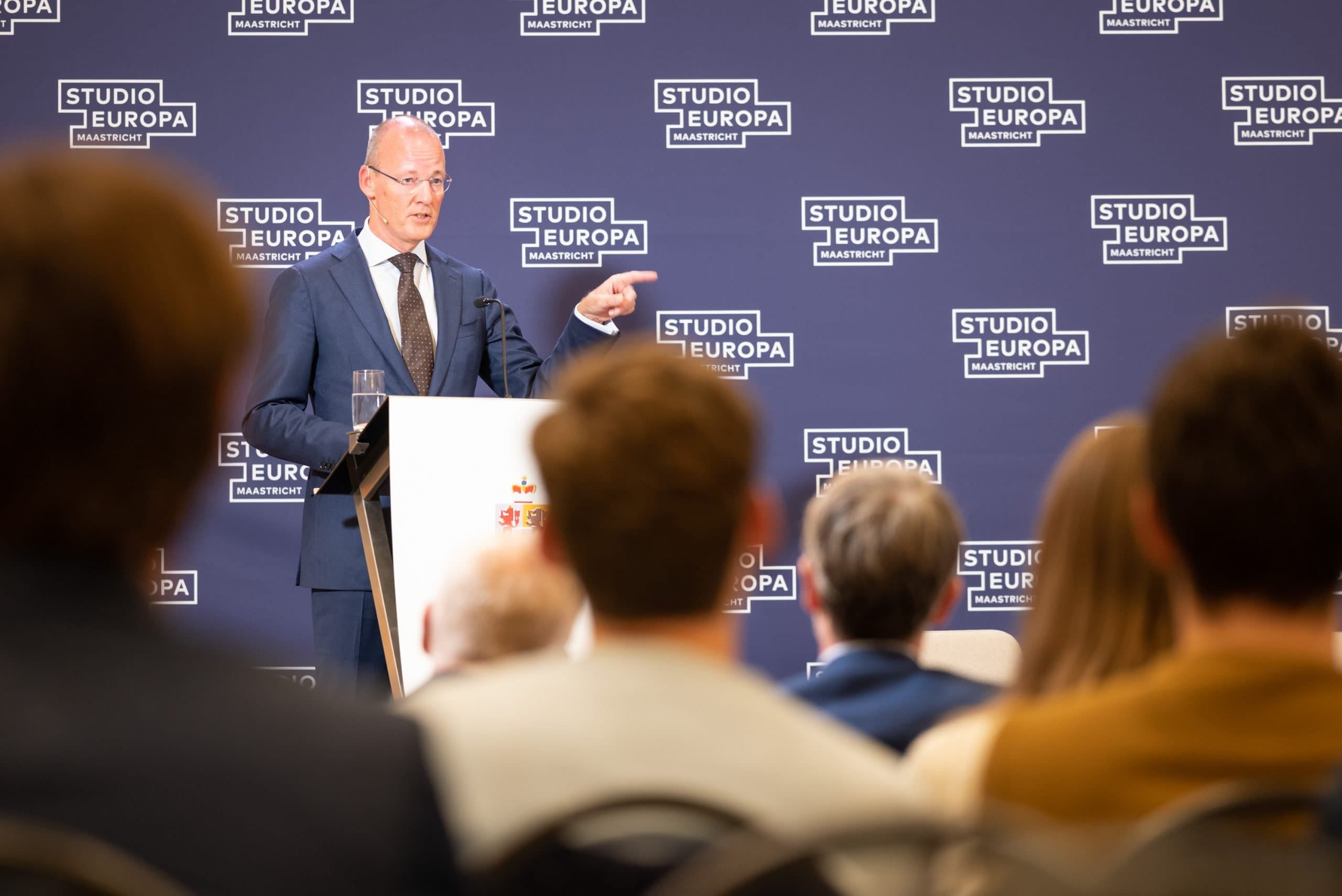 On 27 September, Studio Europa Maastricht organised the conference Euro at 20: shifting paradigms? to commemorate the 20-year anniversary of the euro and the EMU. In this blogpost we will share all photos, videos and transcripts of the day with you.

At Euro at 20 economists, politicians, journalists and central bankers engaged in dynamic discussions with each other and the many attendees. The conference consisted of keynote lectures and various sessions on topics about the euro and the Economic and Monetary Union (EMU).

The general consensus of the experts was that the euro and the EMU structure it was built on have come a long way in the last 30 years. However, there were also critical voices that stated there are still challenges to overcome. Notably, the proposed solution to these challenges can be summarised in one word: solidarity. Be it through fiscal transfers, EU recovery funds or Eurobonds, solidarity is imperative for protecting and sustaining the EMU’s unique yet fragile equilibrium.

It was inspiring to hear the constructive visions the diverse group of attendees had on the euro’s future. The Q&A sessions that followed the panels allowed for lively debate between experts and the audience on the actions needed to reach this envisioned future. What everyone could agree on, however, was that the currency policymakers had in mind when signing the Maastricht Treaty, is one worth working for.

Would you like to know more about the ideas on the future of the euro, the challenges it faces or possible solutions? Let’s look back at all that was said during the lectures and panel sessions, through the videos and transcripts featured below.

“This autumn war is colouring European history for the umpteenth time. This autumn we will commemorate that World War 1 ended a hundred-four years ago.

According to the great British historian Norman Davies, the outbreak of the First World War marks the beginning of a period of seventy-five years: the period during which Europe ‘was divided by’, what Davies has called, ‘the longest of Europe’s civil wars’ – lasting from 1914 until 1990.

The longest of Europe’s civil wars only ended in 1990 with the peace treaty with, and regarding, Germany. It was this treaty that put an end to the order of Yalta and Potsdam, and re-united Germany. But there was more to it. The peace treaty of 1990 also laid the foundations for the end of the Cold War and the reunification of Europe. And that historic reunification of Europe was facilitated by the process of European integration, and re- enshrined in the Treaty on European Union, signed in this city, the city of Maastricht, now almost 31 years ago.”

“The political and economical agenda of autumn 2022 has four main components:

First : the ongoing Russian war against the Ukraine and its consequences
Second : the deep global economic change, with a downturn towards recession, not only due to this conflict and raising energy prices, but probably even more to the change of Chinese economic policy and to its conflict with the US.

You can add the major errors of our economic and business leaders in the last years, they have been waiting and sleepwalking for a too long time, two catch-words illustrate best the situation „in time“ and „supply chain“. Our European economic design is not dead, but needs real reforms !

Third : The risk of an Euro-crisis due to the Italien elections and potential developments there – and the risk of the debt of Italy and France
Fourth : The US midterm elections early November”

Because after 1989, Germany once again wished to become a unified nation. But other European nations, principally the French, were hesitant. A unified Germany would de facto set the economic and monetary tone for a lot of other European countries. And so those countries were keen to ensure that a reunified Germany would remain embedded in a united Europe. That is why discussions on the economic and monetary union gained momentum – eventually leading to the deal between Mitterrand and Kohl: unification for you – the euro for us.”

Session 3: The EMU and finance in Europe with Klaas Knot, William de Vijlder and Linda Zeilina

The day after Euro at 20: shifting paradigms? we organised an academic conference called 30 years Maastricht Treaty: the past, present, and future of European integration with keynote lectures by Thomas Piketty and Paul De Grauwe. Check out our blogpost on this conference and the recordings of the keynotes here: