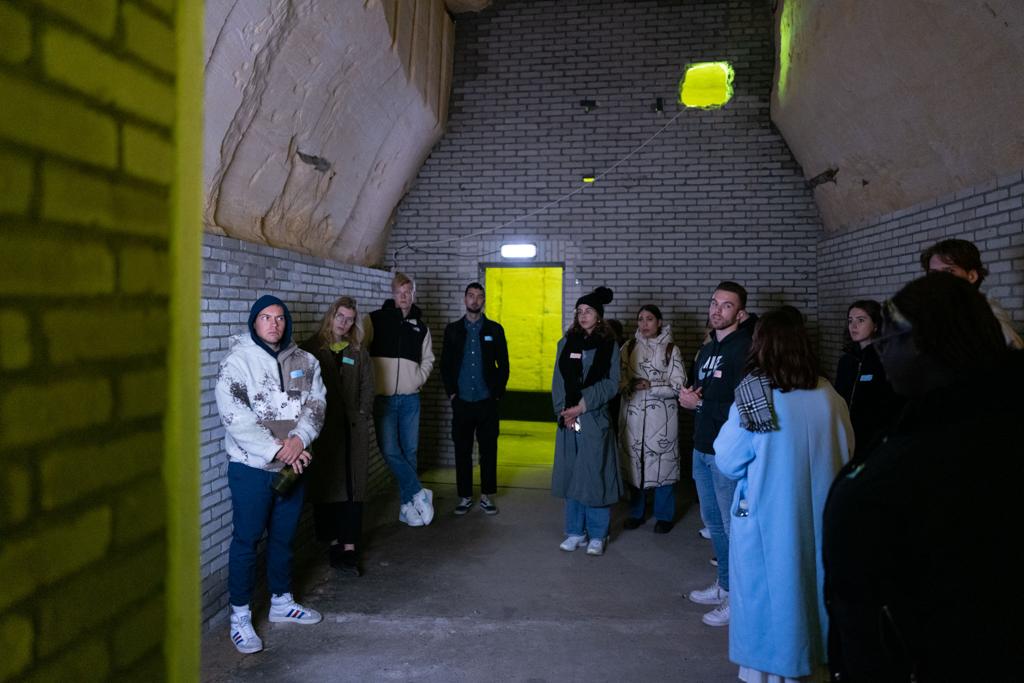 This blog post was written by the students of Zuyd University of Applied Sciences who co-organised the “Crossing Borders” event in collaboration with Studio Europa Maastricht, where they visited the exhibition of No Access:

On 3 November, students discussed their views on migration at the ‘Crossing Borders’ event at the former NATO headquarters. The event was organised by Zuyd University students in collaboration with Studio Europa Maastricht and Viewmaster Projects. The discussion was preceded by a tour of the exhibition in which the students were shown various artworks focusing on life during and after migration, and the experience of migrants on border control in Europe.

The videos shown during the tour included various topics on migration that got the students thinking. For example, the experience of migrants was shown through a video called “children of the labyrinth” was shown featuring parents reading a letter to their children explaining why they fled and what they experienced during this journey. Also shown, for example, was the topic of border control and the opponents of migration showing an impactful video depicting the situation around the Mexican American border in which civilians with guns patrol the border. By showing these videos, the artworks of the exhibition were used as a starting point for the debate that followed with the students afterwards.

The discussion also played on visualisation, allowing students to express their views on the statement by placing themselves on a spectrum that went from agree to disagree. Here, the middle section was marked as neutral territory, and the right and left sides of the room were marked as agree and disagree, respectively. Depending on their own opinions, participants shifted to one side. For example, one of the statements asked whether they agreed or disagreed that translation is an important element in easing the migration process. Here, most participants moved to the right side of the room, indicating their agreement that translation is essential to safeguard important information that would otherwise be lost or ignored. Students discussed that the consequences of this could be that people are misinformed. The majority of students indicated that, in their opinion, good translation helps to overcome the language barrier, stating that because refugees cannot talk to Westerners due to the language barrier, misconceptions and lies easily influence Westerners’ thoughts about refugees. Although the students on the left indicated that in their view, it does not always necessarily influence people’s decisions and opinions.

Another discussion focused on whether encounters between refugees and non-refugees could change public perceptions of migrants. The majority of students agreed that this could change people’s perspective, as people’s perception of migration is mostly based on what the media shows them and this engagement might shed new light. However, some disagreed, stating that people’s attitudes remain the same despite supporting migration based on their own experiences of working in refugee centres. They emphasised the fact that policymakers are not doing much to bring about change and the fact that some of the causes of migration can be addressed by providing aid to countries and addressing the problems that lead to migration. Overall, it was a dynamic discussion and the videos, and the different points and experiences raised by the different students enriched these discussions.