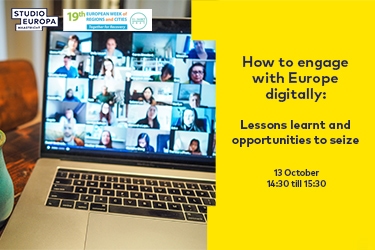 How to engage with Europe digitally: Lessons learnt and opportunities to seize

After more than a year of pandemic-related restrictions and experimenting with online and hybrid event formats, many organisations have developed new skills in bringing people together successfully in innovative ways. In this workshop, Studio Europa Maastricht invites regional, municipal and civil society representatives to share what they have learnt from their experiences during the past year. In an interactive setting, participants can exchange and discuss best practices of hybrid and online events organised to engage citizens in European affairs. What lessons have been learnt and what are the opportunities that can be seized in the future?

Studio Europa Maastricht (SEM) organises events year-round, bringing people together from all walks of life to discuss European cooperation and politics. In addition, SEM supports interdisciplinary research on European affairs by bringing researchers from different fields at Maastricht University together in a cross-faculty research agenda. SEM also promotes the Maastricht Treaty through its European Heritage Label and various programmes which present the Treaty’s history and current relevance to a broad audience.

Beatriz Rios
Beatriz is a Brussels-based freelance reporter, broadcast journalist and events moderator with five years of experience in EU affairs. She is now covering the EU for the Luxembourg Times, Telemadrid and El Mundo and is a regular contributor to other international media outlets. Beatriz has extensive experience in moderating events on EU affairs, such as the EU Green Week, as well as Workplace Europe: Mind the Gap! organised by Studio Europa Maastricht earlier this year.

Anguel Konstantinov Beremliysky
For the past seven months Anguel has been a member at the Common Secretariat of the Conference on the Future of Europe. Previously he has been working for DG REGIO, dealing with administrative capacity and cohesion policy in Bulgaria, Croatia, Hungary, Romania and Slovenia. Before that he worked for 6 years as a press and communication officer at the representation of the European Commission in Rome. Anguel is passionate about and senior specialist in communication.

Giuseppe Procaro
Giuseppe leads the outreach activities of Bruegel, the European think tank specialising in economics. His responsibilities include communications, media, events and publications, as well as membership relations and the related support to the governance of the organisation.

Giuseppe has been at Bruegel since 2014, and until December 2019 served as Head of Communications and Events. Giuseppe holds a PhD in Geography of Development from the University of Naples “L’Orientale”. He was Secretary-General of the European Youth Forum between 2009 and 2014 and previously worked at the World Bank in Kosovo and Paris, as well as at the European Office of the World Organisation of the Scout Movement.

The event will be moderated by Job Zomerplaag, programme editor at Studio Europa Maastricht.