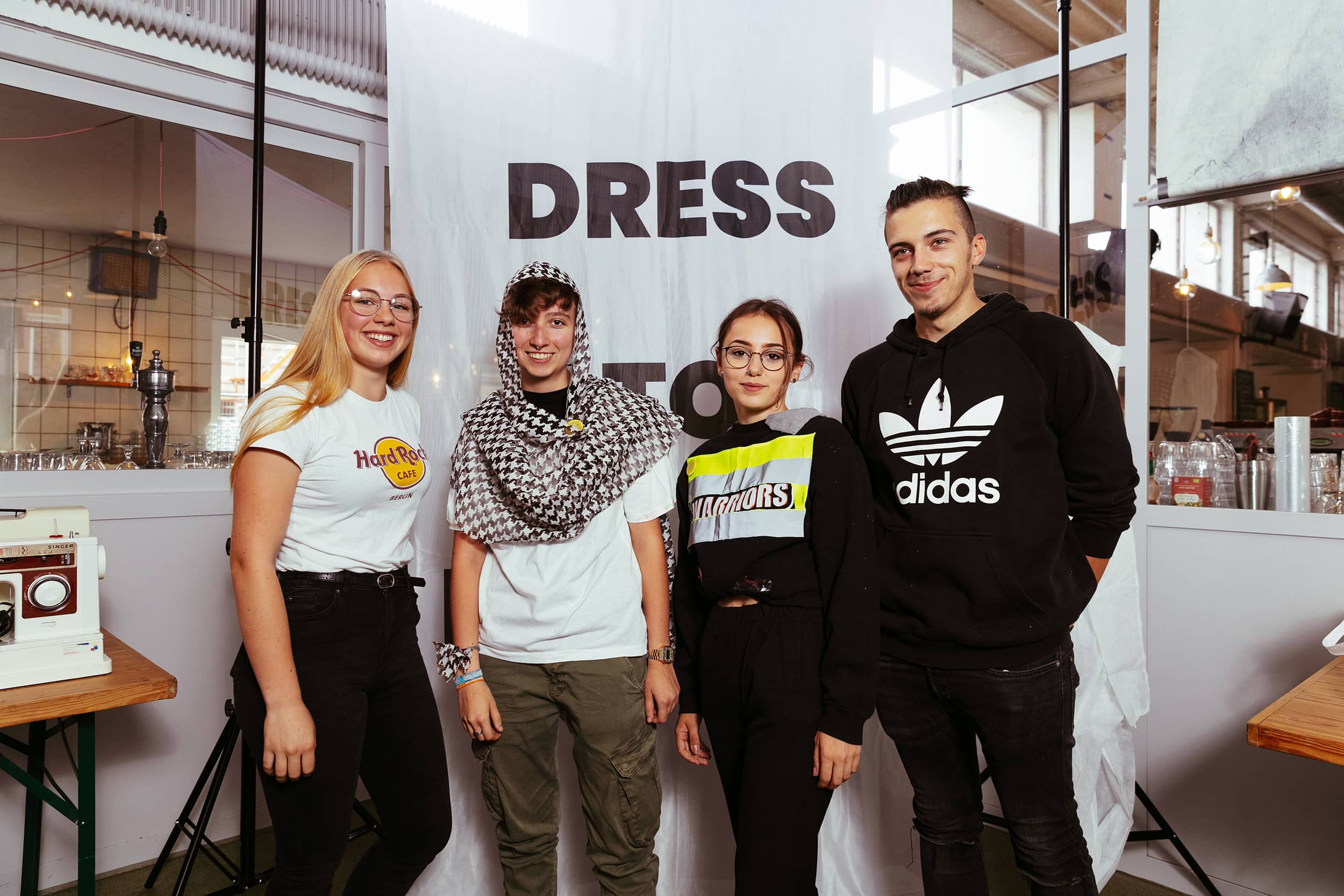 To celebrate the 75 years of liberation in Limburg, Studio Europa Maastricht organised in collaboration with Fashionclash on 12 and 13 September, creative design workshops for young Belgian, German speaking and Dutch students.

Altogether, 150 students from different schools and nationalities, spoke about the meaning of freedom in their lives as well as the meaning of peace on the European continent. It was great to see that despite the language barriers, participants were able to speak and exchange views with each other on such important topics. The students translated the outcomes of their brainstorm sessions into creative designs.

We were positively surprised by the ideals that many of these young European citizens defend. We noticed that freedom is not anymore only a matter of absence of war. Instead, many expressed feeling that their freedom is being threatened by climate change and environmental pollution. Another surprising outcome were the personal stories of most young women on their experiences with individual freedom. For them freedom represents not having to worry about gender discrimination and harrassment on the workfloor or on the streets.

We invite you to scroll down for an overview of the most striking designs and stories! And don’t forget to come to the SAM-Decorfabriek during the FASHIONCLASH festival weekend from 1-3 November where a selection of these designs will be exhbitied in a special Dress to Protest installation!

Different parts of Europe faced social unrest earlier this year with many citizens participating in the Yellow Vest demonstrations. “This design is a statement against the Yellow Vest”, tells one of the young students. He and his friends bumped into Yellow Vest protesters while protesting against climate change in The Hague. “In response, we have made a vest from recycled plastic.” Their creation shows that you can reappropriate the associations that many people have with a politicized item of clothing, such as a yellow vest, and use it for your own protest

This dress is covered with the slogan “the way we dress doesn’t mean yes”. The student is clear about it, “for me freedom means being able to wear what I want without having to hear negative comments from others”. Did she experience this? “Sometimes when I am wearing clothes that are a bit weird I will receive comments from a couple of guys, but I am honestly not really bothered by it”.

These students have tried with their burqa-like outfit to combine as many colours as possible, “just like a rainbow”, a reference to LGBTQ+. “But not just that”, says the student behind the mask-like veil, “by wearing this, no one can see who I am. When I smile, no one can see. It becomes more difficult to approach each other”.

The combination of bright colours and the veil is also a reference to the suppression of homosexuality in different religions, a personal freedom which is not evident for everyone in the world. But it’s not a black and white story, adds one of the students, because “if you don’t want to be seen, then this outfit feels really secure, underneath this [facial veil] !

The corset-like waist-piece refers to the way women were expected to dress before the 20th century. Women in Europa, are (thank god?) not anymore obliged to live a constricted life.

“History remains history”, an interesting choice for a slogan – because aren’t we used to say “history repeats itself”? This student is preoccupied with precisely these kinds of issues. He wonders, “can we put the recent political developments in an historical perspective? Or are they all new phenomena?” If you ask him, he thinks, “that we are really living in different times. Compared to the 1930’s people and political parties are taking a strong stand against extreme nationalism”.

The Dress to Protest workshop from mid-September mostly revolved around the themes of freedom and liberation in Limburg and Europe. These students, however, seemed more concerned with the freedom of turtles. “Turtles are getting stuck in the plastic soup, it’s really sad”. How do they become more conscious about these issues? “Mostly through social media”, says one of them. Climate and pollution topic also seem to be recurring themes at home, “I am more interested in these issues than my parents. They did buy an electric car though. In addition, I am trying to buy less clothes at brands who are known to treat their employers badly. For me, child labour in clothing factories is the worst”.

Many European societies are becoming more multicultural. People from other cultures move to European countries in hope for a better future. Every now and then a heated debate takes off on the question whether or not Muslim women are allowed to wear a full-covering veil in public spaces.  These students came up with an interesting solution, “We have made a burqa from a transparent fabric. Therefore, it is a compromise between freedom of religion and the right to see one’s face in public spaces”. With this design, the students show that, even when public debate is polarized, there still can be room for a middle ground. “With such a burqa, all women, regardless of their beliefs, can go to public places such as the hospital”.

Not all the students agreed with the idea of finding a compromise by means of a transparent veil. Another design highlights the other side of the story. For the student behind the design, a face-covering veil symbolizes the limitations imposed on the freedom of women. “The see-through and net-like veil and the hair that penetrates through it, makes this design a statement against face-covering veils”.

Disappointment in the political elite is also an issue among younger generations. The students are astonished by the things that some famous politicians get away with.  “We created an anti-establishment dress. It is a statement against all politicians who are behaving scandalously. A good example is Donald Trump saying “grab them by the pussy”. People think we are freer in the United States and the West compared to other parts of the world – but is that actually the case with this kind of leaders?” An interesting question and rather apt for the European context and in particular political figures like Boris Johnson. Don’t famous politicians also have an exemplary role to live up to?

Freedom, according to this student, is a state of mind which can be reached when not worrying too much about material possessions. “My outfit is about the American way of life where everything is about money. I am not really bothered with these things. I have the feeling that mass consumption is less of a thing in Europe. Money doesn’t play an important role in my life, friendships are more important to me. This mindset also brings me more freedom”.